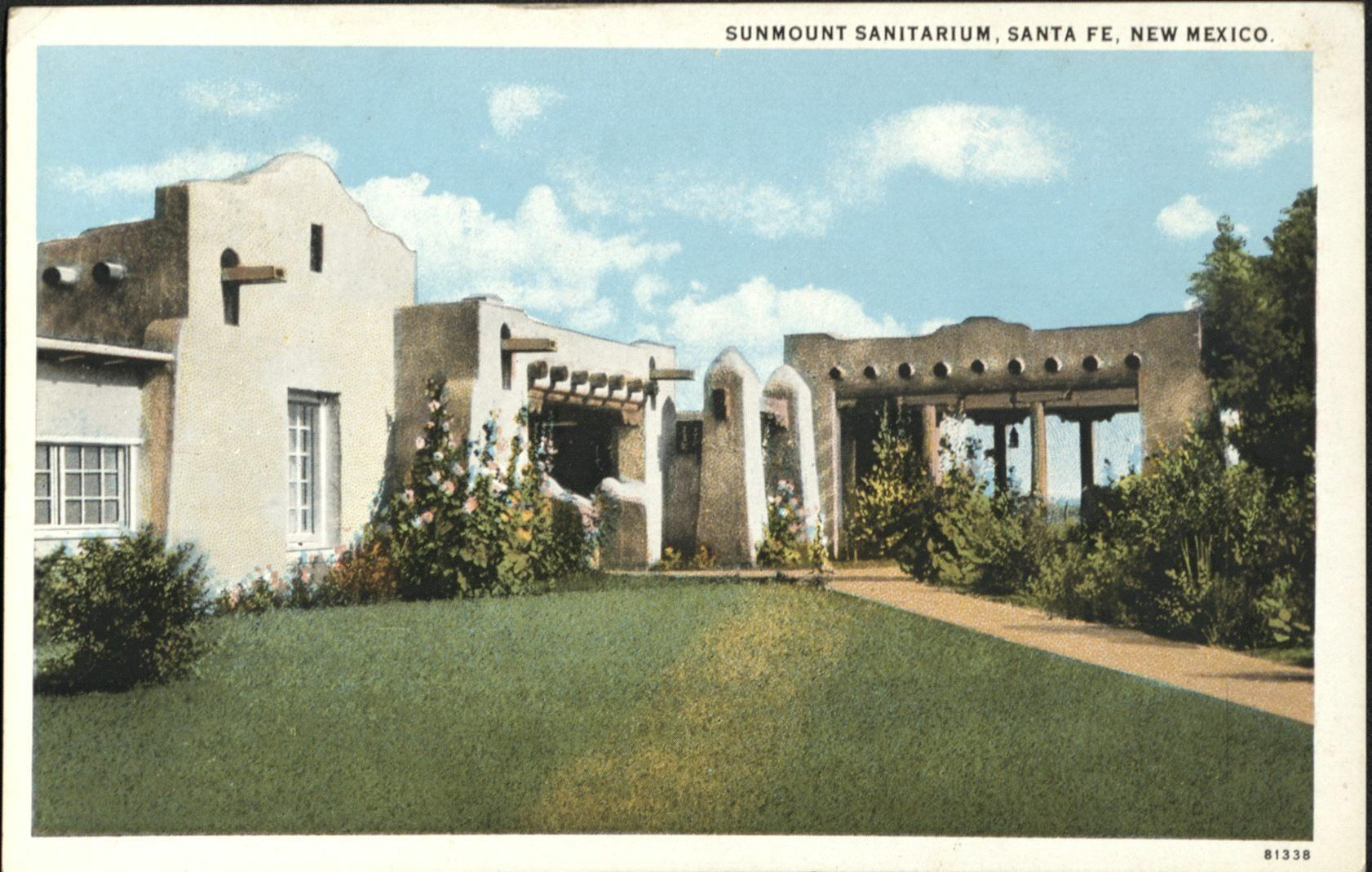 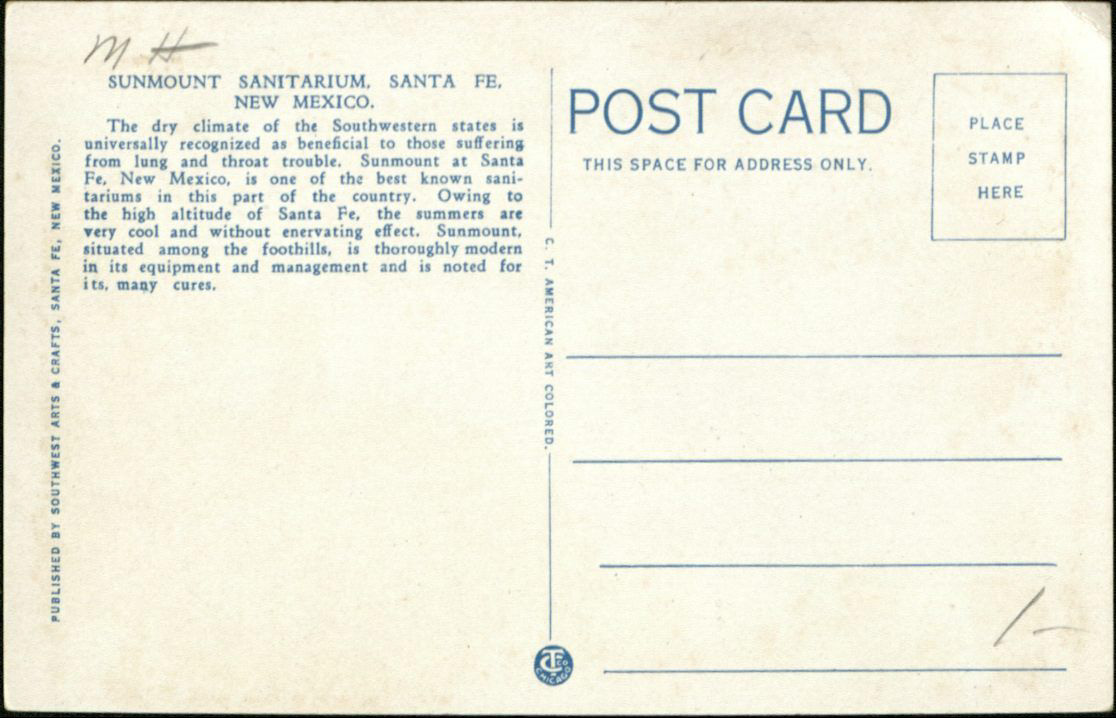 Front and backside of Sunmount postcard, by Southwest Arts and Crafts, Santa Fe. Quote from back "Sunmount was noted for its many cures." From Postcard Collection, CSWR PICT 995-027 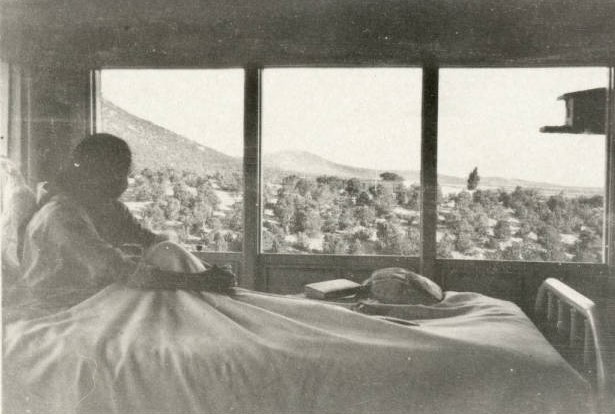 In the nineteenth and early twentieth centuries, a tuberculosis epidemic gripped the United States, particularly affecting urban areas where the respiratory form of the virus passed easily from person to person. As a result, thousands of residential tuberculosis sanatoriums developed. High desert regions were particularly prized by health seekers looking for dry, sun-filled, life-saving locations. Many early settlers migrated to New Mexico for its temperate climate, aggressively marketed as conducive to the treatment of the infection. In a state with no significant industry but with an abundance of fresh air and sunshine, sanatoriums became a big business.

Sanatoriums sprang up across the state and became the core of New Mexico’s modern health care system and medical research facilities. St. Vincent’s Hospital in Santa Fe developed as a tuberculosis clinic, run by the nuns of the Sisters of Charity. The Lovelace hospitals in Albuquerque started as Lovelace Sanatorium, run by Dr. Lovelace. Presbyterian Hospital also began as a sanatorium. The elegant remnants of the original building can be see from Interstate 25. The Valmora Industrial Sanatorium in Watrous, Mora County developed as a non-profit residential clinic, funded by businesses back East for their workers. 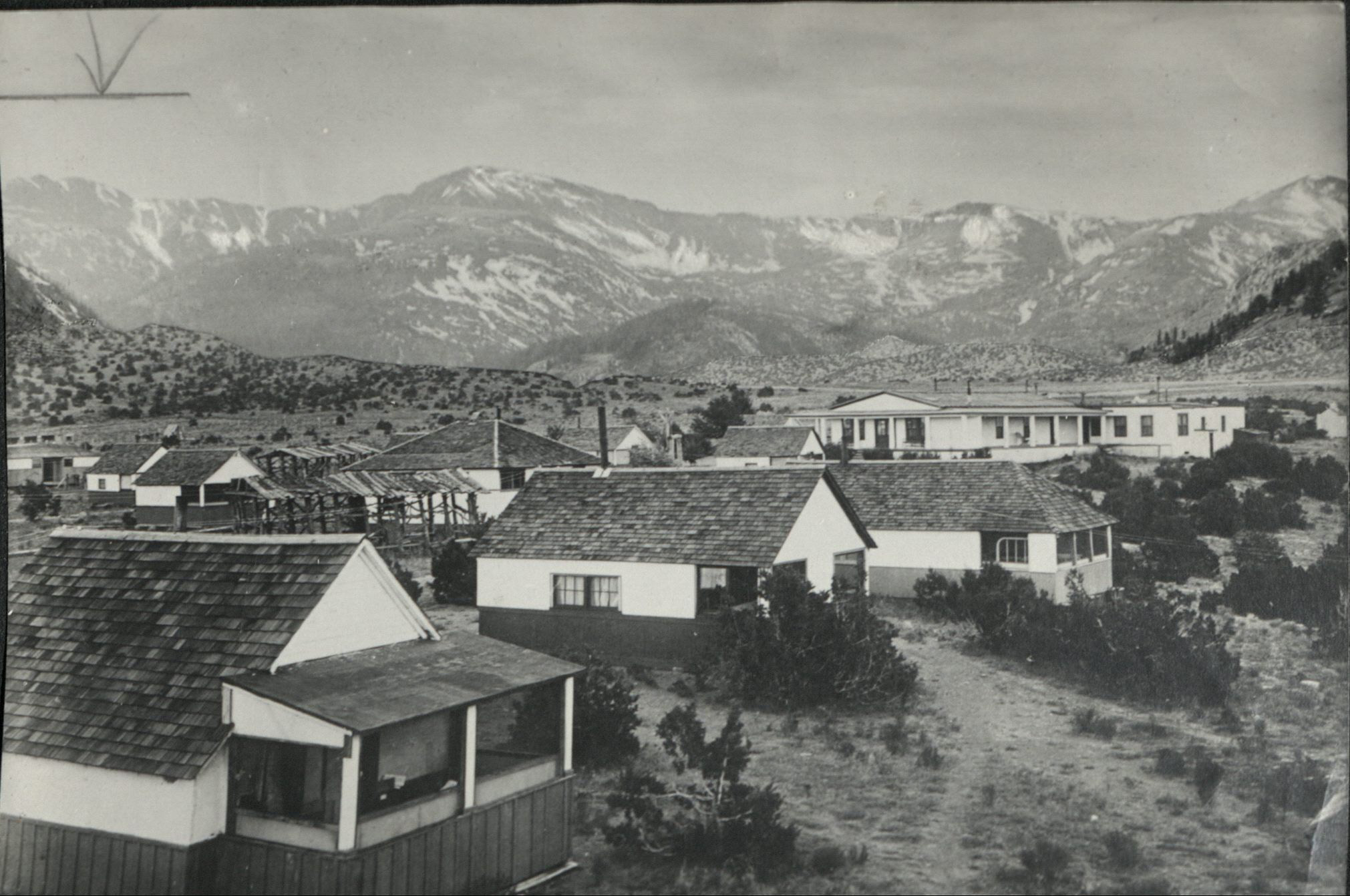 One sanatorium in particular, Sunmount, located on the outskirts of Santa Fe helped nurture an arts community which exerted a significant influence on the local built environment. Developed by Dr. Frank Mera in 1903, Sunmount Tent City advertised as a destination for both consumptives and tourists. Popular with wealthy Easterners who came west to “take the cure,” patients often took up residence for months and in some cases, years. One of the first converts to the regional architecture, Dr. Mera commissioned revivalist architects Rapp, Rapp, and Hendrickson to design his clinic in the Spanish Pueblo Revival Style in 1915. The new clinic possessed all the traditional Spanish Pueblo characteristics: stepped massing, flat roofs, earth-toned adobe walls, portals with vigas, landscaped with English-style perennial gardens.

The primary hospital and residential facility also served as a meeting place and social center for a group of patients and friends interested in local art and architecture. Calling themselves the Sunmount Salon, participants enjoyed trips to local pueblos and villages. Many patients decided to settle in Santa Fe after their rehabilitation and construct their own Spanish Pueblo Revival style residences or renovate old adobe homes. Among the Sunmount patients who made outstanding contributions to New Mexico were the poet Alice Corbin Henderson; the architect John Gaw Meem; the creator of Zozobra, Will Shuster; and the aviator/architect Katherine Stinson Otero. 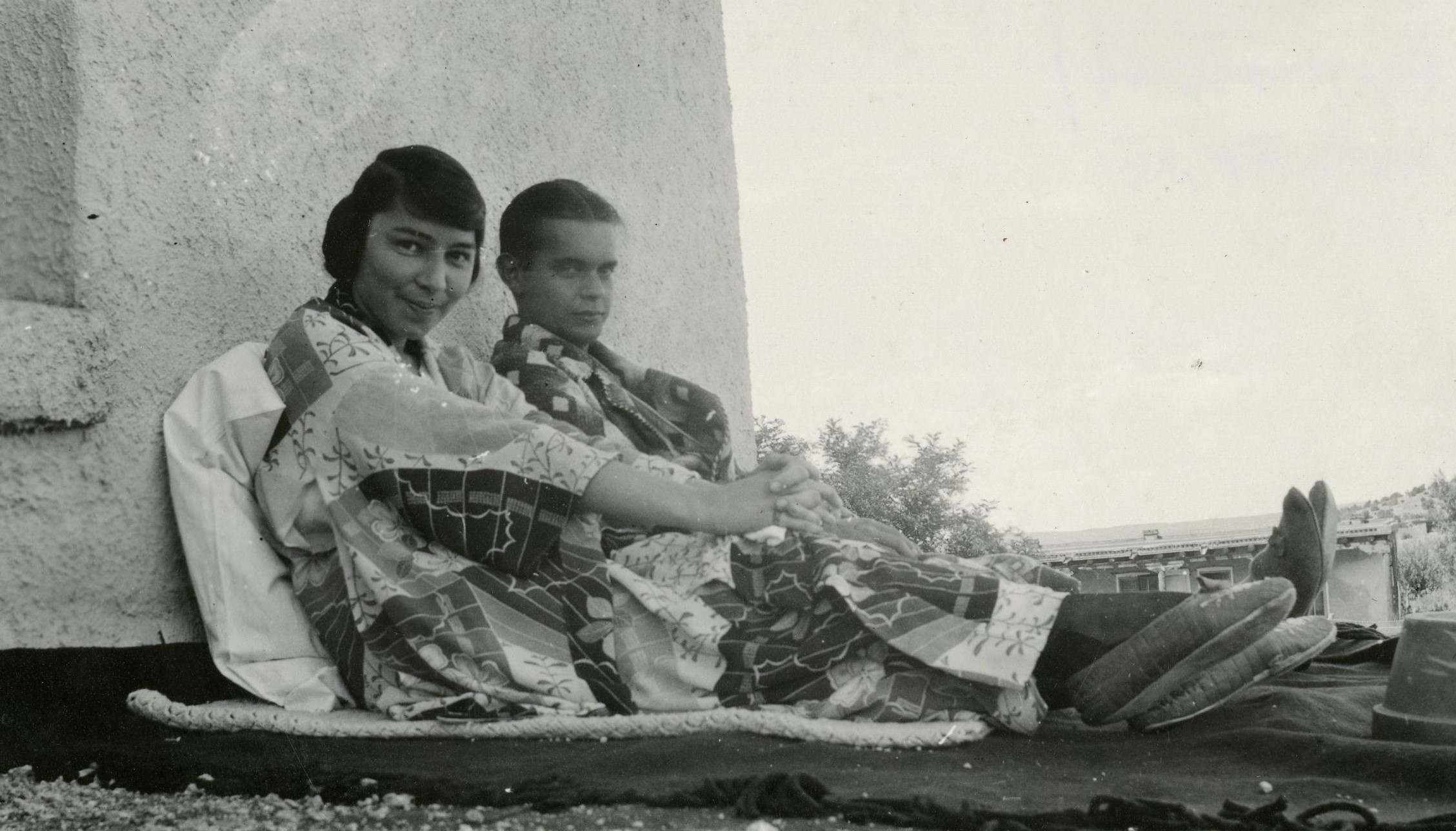 Today, we understand that the migration of tuberculosis patients to New Mexico had complicated effects. Patients journeyed to New Mexico in droves. Many settled permanently in a desperate attempt to survive the deadly and highly infectious disease, resulting in an exploding population increase by non-Natives. Additionally, healthcare workers employed in the sanatoriums were exposed to the disease and inevitably carried it to their homes and villages. Thanks to modern medicine advances tuberculosis is treatable and curable today. 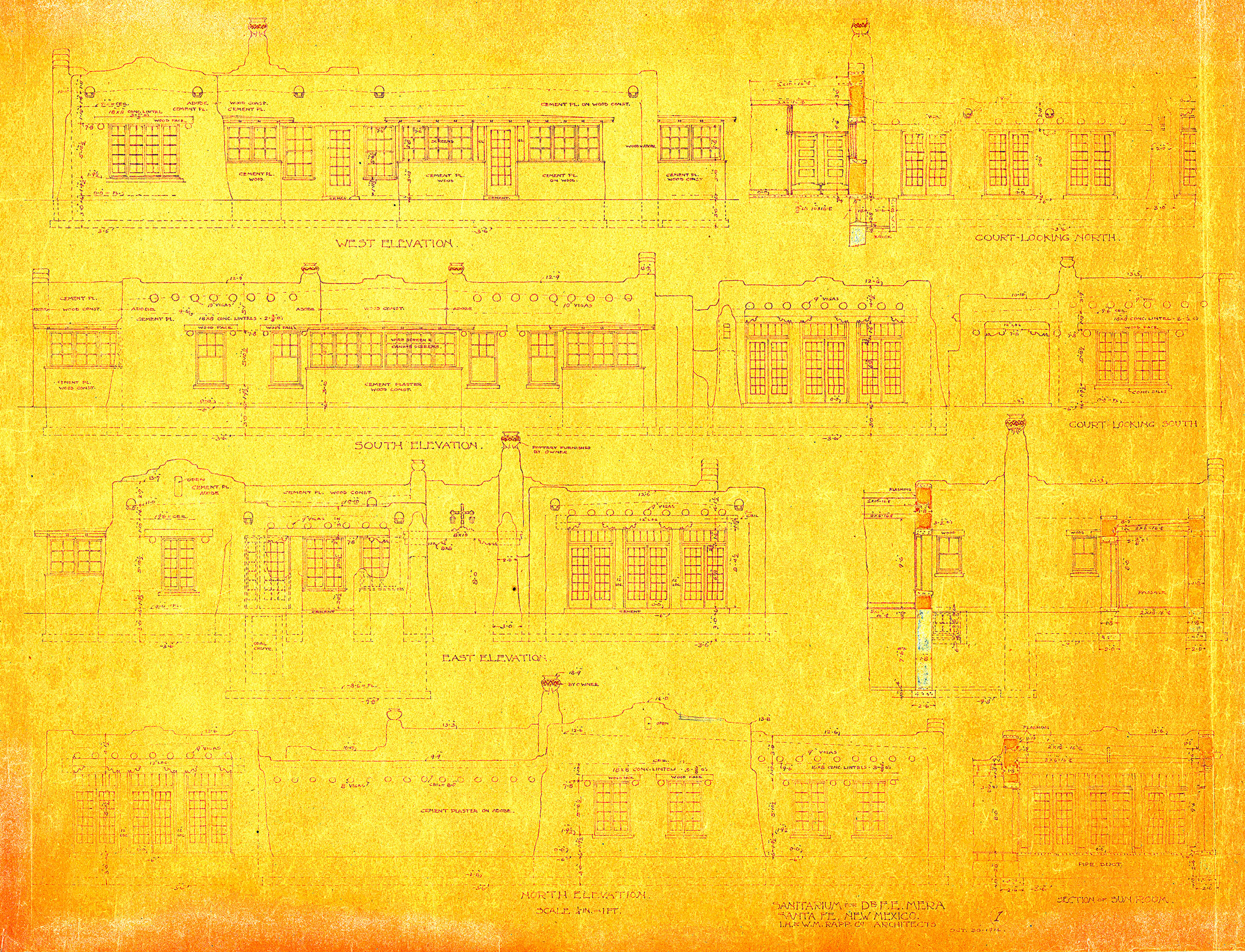 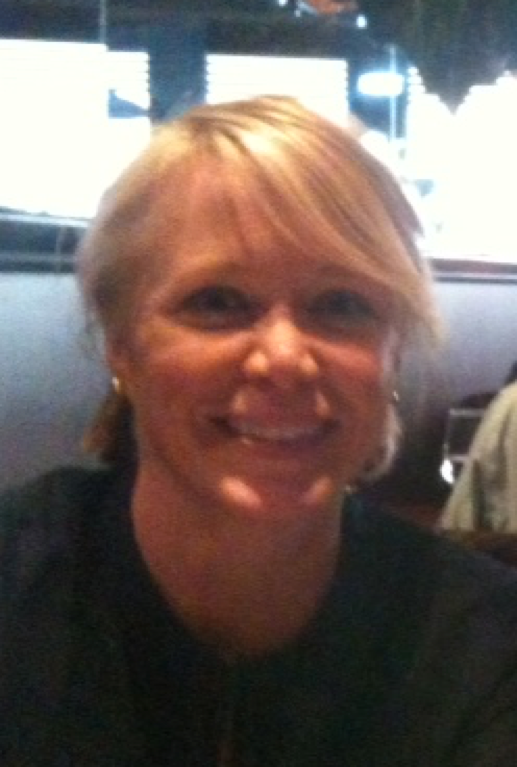 Floor plan and elevation, proposed house for Sunmount Sanatorium, circa 1924, by Meem and partner McCormick, architects. Cassius McCormick was an accountant and fellow patient at the facility. From John Gaw Meem Drawings and Plans, CSWR SWA 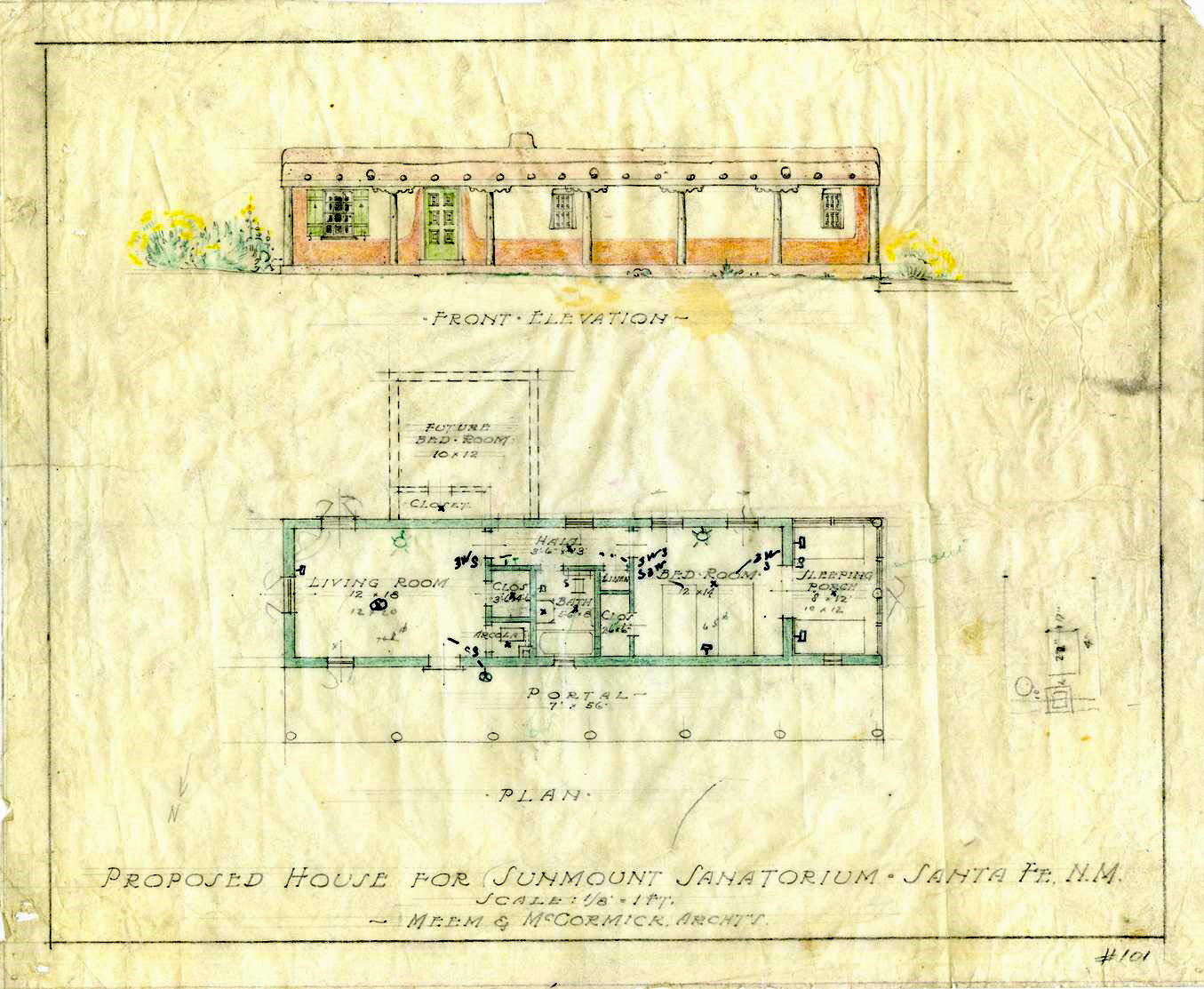