This guide provides an introduction to the Virtual Reality and 360° Video services provided by the Centennial Science & Engineering Library, as well as other resources to help explore the technology.

How to Reserve VR

What is Virtual Reality?

Virtual Reality (VR) is a computer generated immersive environment that can be interacted with in a seemingly real way by the user using special equipment like a headset or controllers.

How does VR work? The lenses of the headgear magnify the image, which fills your field of view with a stereoscopic view, and external sensors also track how your body moves. As you immerse yourself, you see nothing but your immediate virtual environment. Learn more by exploring resources on VR in the library, or better yet, try out the gear and experience it first-hand!

Learn more about VR from the video below:

Careful with cables. And don't sit on a virtual chair!

Safety recommendations for when you use VR: 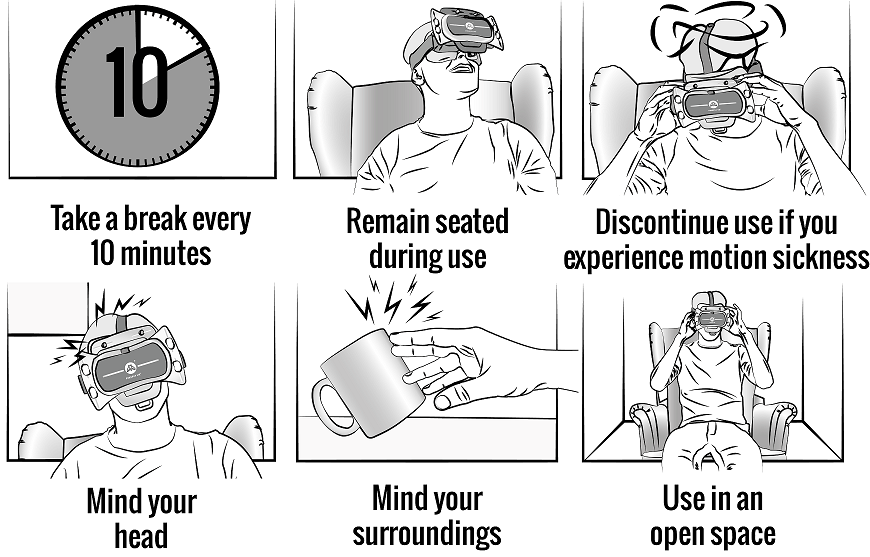 If you have any questions or would like to discuss using the service, feel free to contact us.

What can I do with VR?

Virtual Reality and 360° video can be used for various forms of simulations and entertainment. Here are just a few examples of practical / educational uses:

VR:  Virtual Reality (VR) is a way users experience computer-generated worlds as real. Through VR headsets that are connected to a computer, users immerse themselves in a simulation of a virtual environment and experience the virtual, "as-if-really-there" reality of the environment.

AR:  Augmented Reality (AR) allows the user to see the real world in front of them, with an overlay of digital content. Google Glass and Pokemon Go provide some of the most famous examples of augmented reality.

MR:  Mixed Reality (MR) is similar to augmented reality, but incorporates both simulated and real world environments to create an experience where real and virtual objects can interact with each other in real time. At this point, mixed reality is still a concept that is being worked toward, and is still a long way from being implemented in practice.

XR:  Extended Reality (XR) can be defined as an umbrella, which brings all three Realities (VR, AR, and MR) together under one term. Extended Reality refers to all real-and-virtual combined environments and human-machine interactions generated by computer technology and wearables.

Latency:  Latency in VR refers to the time it takes for the computer to render an image and for that image to appear on the HMD. This needs to be as low as possible so when you turn your head quickly the image displayed will be at the same speed. If it's too slow then the lags behind your movement and it can make you feel sick.

OLED:  Organic Light-Emitting Diod. This refers to the display technology used for the screens.

IPD:  Interpupillary distance (IPD) is the distance between the center of the pupils of the two eyes. IPD is critical for the design of binocular viewing systems, where both eye pupils need to be positioned within the exit pupils of the viewing system. If your IPD isn't set correctly it can create eye strain.

Frame Rate / FPS:  Frames Per Second. The frequency at which frames in a television picture, film, or video sequence are displayed. For VR, the optimal frame rate recommend by Oculus and HTC is 90fps. As a comparison, film and TV run at 24fps.