A guide to primary and secondary sources about the history of UNM. 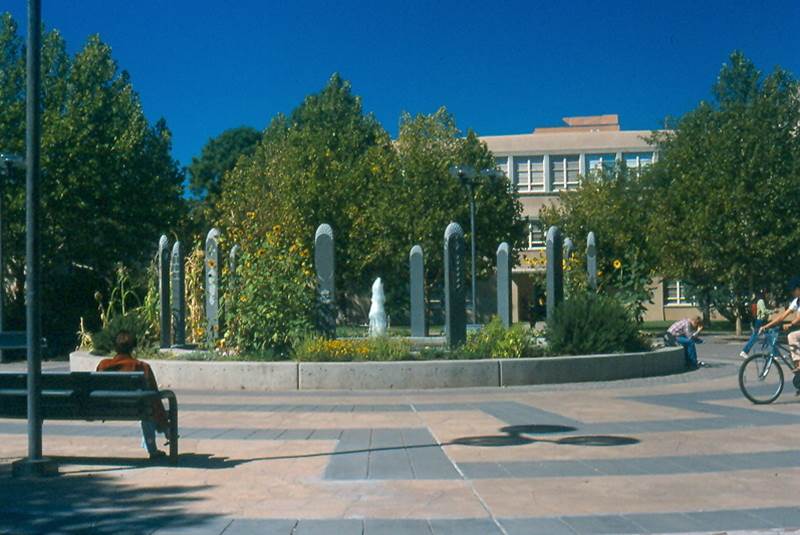 Youn Ja Johnson attended UNM where she earned a Bachelor of Arts, Master of Arts, and Master of Fine Arts  from the UNM Department of Art and Art History.  She has also taught classes in the UNM departments of Philosophy and Religious Studies. Designed to honor her own grandmother, all grandmothers, and Mother Earth, she generously donated this work to UNM in 1992.  The University added the fountain and the seasonal plantings later, making "Tribute to Mother Earth" a piece of hydraulic art, art that incorprates water as part of its expression. 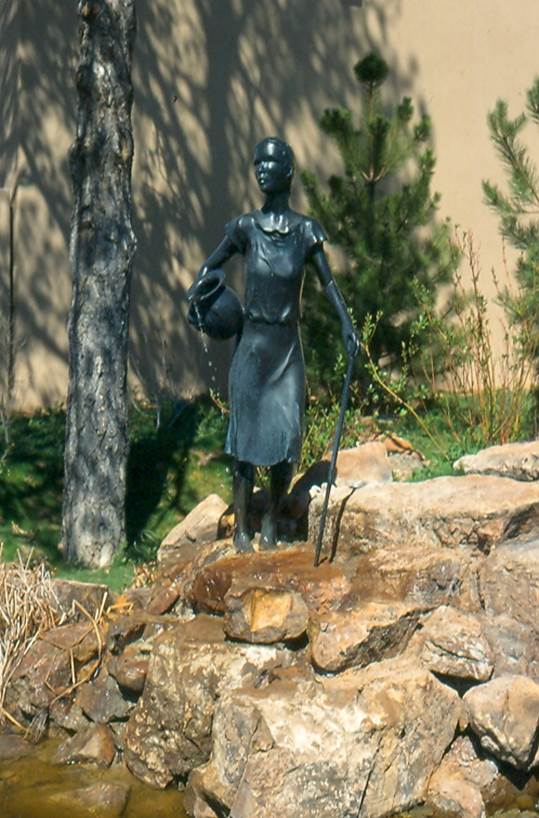 Michael Naranjo is a native of Santa Clara Pueblo.  While a boy, his mother taught him to work with clay and it seemed natural that he would become an artist like so many in his family.  Michael served in the U.S. Army in the Vietnam War and, at the age of 22, everything changed; he was blinded and lost much of the use of his right hand in combat.  He could have given up.  Instead he overcame this hardship and has become highly regarded as a sculptor, often referred to as "The Artist Who Sees with His Hands."  The sculpture was originally designed with a self-circulating fountain, with water flowing out of the olla the figure carries (as shown here). 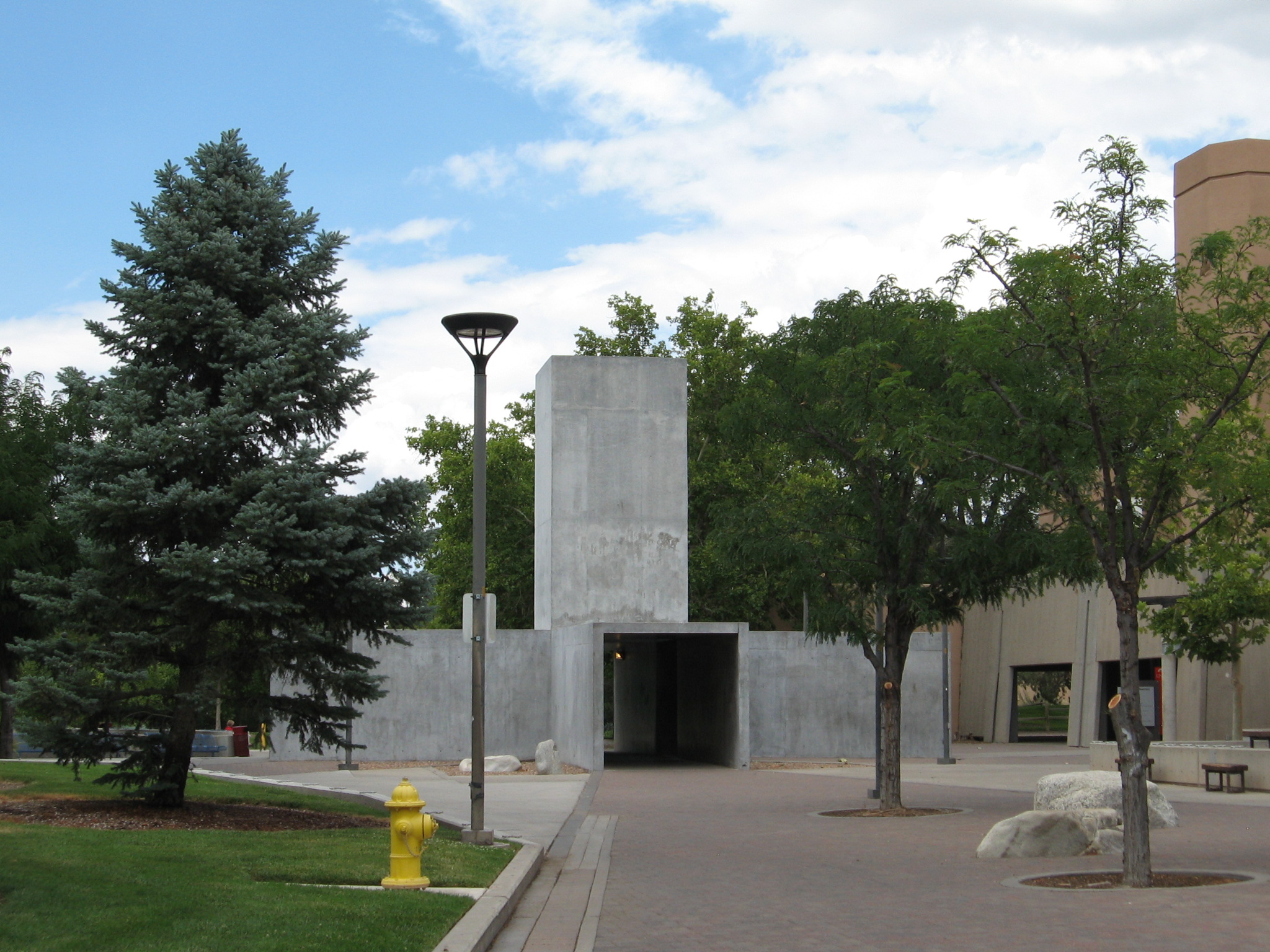 Bruce Nauman, "Center of the Universe" 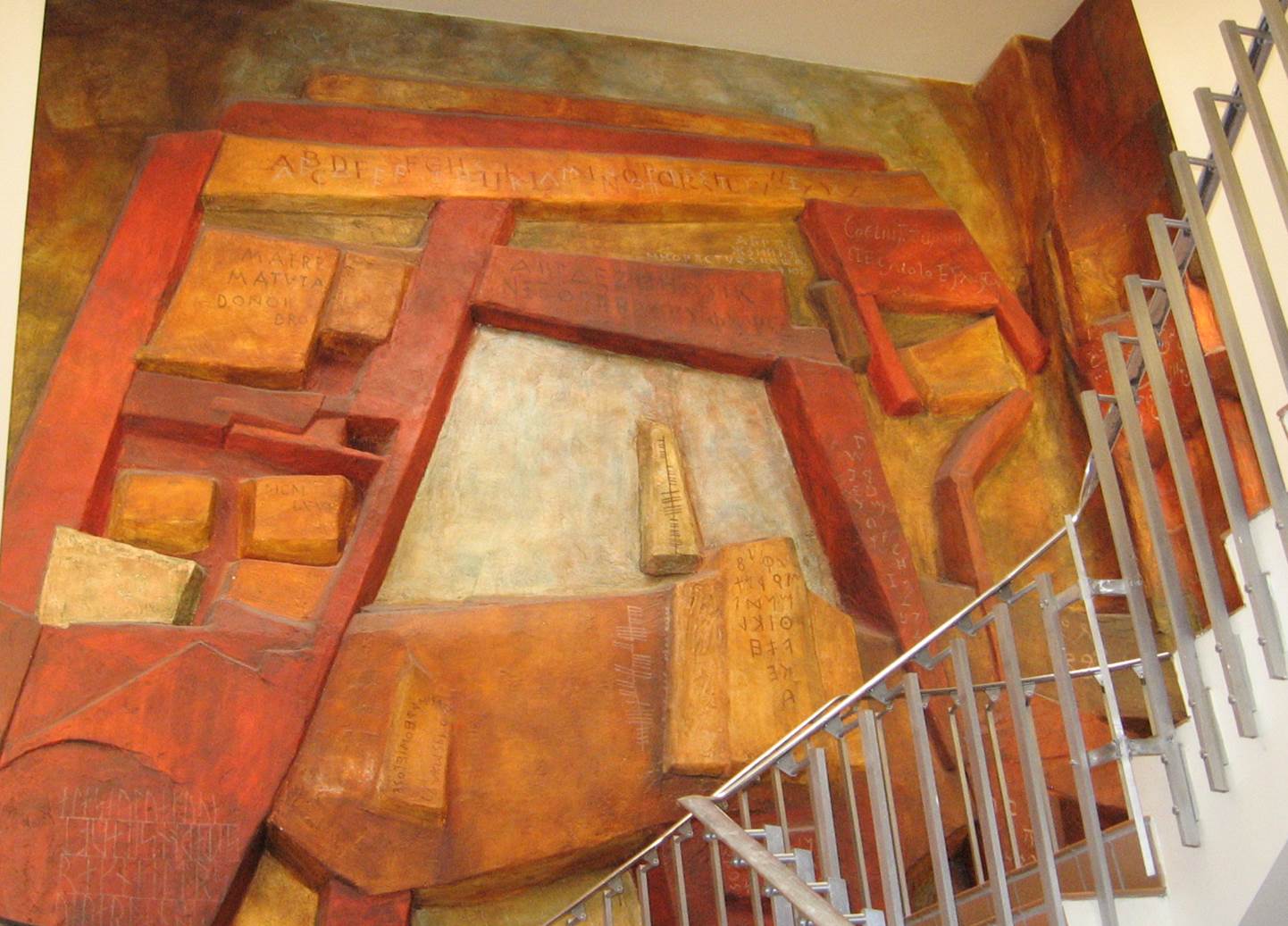 John Tatschl, an Austrian artist skilled in many media, began a long career as Professor of Art at the University of New Mexico in 1946. Throughout his many years on the faculty, Tatschl taught art and created a number of artworks on campus. His monumental sculpted mural, The History of Writing, was designed in 1966 to adorn the main stairwell in the newly expanded Zimmerman Library.  The history of writing is depicted in the mural by means of symbols painted on 53 of the projecting geometric masses. Beginning in the basement with simple scratches and line drawings, the symbols gradually evolve in time and elevation to proto-writing, hieroglyphics, various ancient alphabets, culminating at the top of the composition on the third floor with our Latin alphabet. The stone-like projecting masses and somewhat muted colors of the mural give the composition the "feel" of a grotto through which we ascend through time.

LibGuide on Public Art at UNM

A Library Guide on Public Art at UNM has been created and is publicly available.  This guide provides an introduction to writing about art and the process of conducting research on public art.  It also introduces some of the public art on campus.

An inventory of the public art on the UNM campus was authorized by the Board of Regents and is managed by the Historic Preservation Committee.  The inventory began in 2017 and is ongoing.  Public art found in Hodgin Hall and Zimmerman Library are included so far.