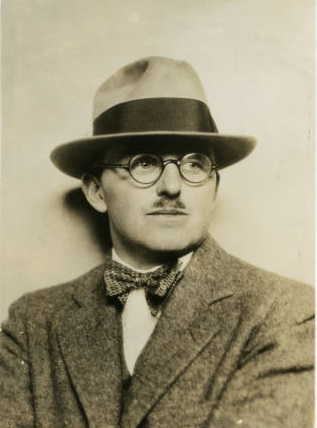 Drawing upon his interest in the preservation, restoration, and revival of the local indigenous architecture, Santa Fe architect John Gaw Meem designed an exquisite complex of Spanish Pueblo Style buildings at the University of New Mexico, from 1934-1959. After seventy five years, Meem’s Zimmerman Library (1938) remains, architecturally and symbolically, the iconic centerpiece of the campus and still functions as the main university library. As intended by Meem, Zimmerman, like the local pueblo buildings which served as its model, expands with the needs of faculty, students, staff, and the local community, remaining the heart of UNM’s lively modern campus, while retaining its character as one of New Mexico’s premier historic buildings.

Born in Brazil to missionary parents, John Gaw Meem graduated from the Virginia Military Institute in 1915 and worked as a banker in New York City. Diagnosed with tuberculosis as a young man, Meem was advised to move to a dryer climate. Attracted by a Santa Fe Railroad advertisement, Meem traveled to Santa Fe’s Sunmount Sanatorium to recuperate in 1920. Encouraged by Sunmount’s Director Dr. Frank Mera, Meem mingled with the “Sunmount Salon,” a group of artistically-minded patients and local residents interested in the culture, landscape and historic architecture of the region. Inspired by what he saw, Meem decided to make his home in Santa Fe and train as an architect. Meem studied at the Atelier Denver, apprenticed with the Denver firm of Fischer and Fischer, and opened his first architectural office in a cottage provided by Dr. Mera on the grounds of Sunmount in 1924. Over the years Meem worked with various partners including: Cassius McCormick, Hugo Zehner, Edward O. Holien, and William R. Buckley.

One of Meem’s first jobs was as the supervising architect of a grass-roots preservation group he helped form called the Committee for the Preservation and Restoration of New Mexico Mission Churches (CPRNMC) in 1923. The CPRNMC organized and financed, with the help of wealthy donors, restoration projects at a number of mission churches including: the roof of the mission at Zia Pueblo (1923), roof repair at San Esteban del Rey at Acoma Pueblo (1924-1927), El Santuario de Chimayo (1929), San Jose de Gracia at Las Trampas (1931-1932), San Esteban del Rey mission church and convent (completed in 1939), and the rebuilding of Christo Rey Church (completed in 1940).

While working with the CPRNMC, Meem quickly established a thriving architectural practice, designing numerous private homes for New Mexican settlers from the East and Midwest. Many of his clients were friends from Sunmount who also decided to stay in the area, including Cassius McCormick, an heir to the Chicago reaper fortune, whose magnificent Spanish Pueblo Style estate was designed by Meem in 1930 (figure.) in Nanbe, NM. Inspired by his love of the region, Meem’s residences blended with the landscape and seemed to belong to the land, as in the Amelia Hollenback Residence in Santa Fe (1930) (figure.). Meem was an early and active member of the Spanish Colonial Arts Society in Santa Fe and like early twentieth century Arts and Crafts architects, Meem was interested in creating a unified home environment, designing traditional decorative art and furnishings for his buildings and employing local craftspeople to make them.

In addition to his residential commissions, Meem designed many public buildings, primarily in Santa Fe and Albuquerque. After the stock market crash of 1929, public funds distributed through New Deal programs such as the Works Progress Administration (WPA) and the Public Works Administration (PWA) flowed into New Mexico. In Albuquerque, one of the primary beneficiaries of federal money was the University of New Mexico. UNM President James F. Zimmerman successfully applied for PWA funds and organized the construction of a core set of buildings on the campus. An admirer of the local Spanish and Pueblo architecture, Zimmerman wanted the UNM campus to reflect this unique regional style. Having secured a reputation for the Santa Fe Style, Zimmerman and the UNM Regents hired Meem as their primary architect. From 1934-1959, the year of his retirement, Meem’s Santa Fe-based firm designed all of the primary buildings on UNM’s main campus. Meem’s initial UNM commission was Scholes Hall (1933), the main administration building. Meem’s next commission was Zimmerman Library (1938). Other UNM buildings financed with funds from the PWA are Anthropology (originally the student union), Naval Sciences (originally a men’s dormitory), Bandelier Hall-West, Marron Hall-East, the heating plant, and a state health laboratory (now the Anthropology Annex). 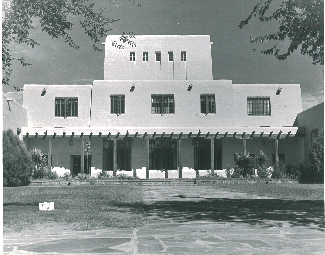 Zimmerman Library, was designed by Meem in 1936 and opened on 1 April 1938. The library was constructed on the then undeveloped northeast side of campus with wide-open views of the Sandia mountains (figure.). The Spanish Pueblo Style structure is highlighted by a central nine-story book tower of steel reinforced concrete, relived by vertical rows of windows. The two-story main structure was flanked by flat-roofed wings projecting to the north, south, east and west. A traditional portal runs along the main west façade. While hollow tiles, steel and concrete replaced adobe bricks, the undulating molded exterior and corner buttressing recalled the traditional regional architecture and the monumentality of the mission churches. The interior of the building is emphasized by the work of local craftspeople including punched tin light fixtures, elaborate wood carving and handmade furniture, all designed by Meem (figure.) and rendered in WPA funded workshops in the area. The construction of Zimmerman Library and the other PWA projects on the UNM campus provided much needed employment for local laborers and artisans through New Deal financing.

Meem always intended for the library to grow organically with the increased needs of the campus, like a traditional pueblo building grows according to the needs of its occupants. According to his plan, an addition called Zimmerman II was completed in 1966 by the Albuquerque firm Ferguson, Stevens, Mallory, and Pearl. An addition called Zimmerman III was completed in 1973 by the firm Dean, Hunt, and Associates of Albuquerque. A third major addition designed by Van H. Gilbert was completed in 1993. According to Meem’s friend, UNM University Architect Van Dorn Hooker, Zimmerman Library was Meem’s personal favorite among his many public buildings and a legacy in the state. Like the campus itself, the Zimmerman Library, as conceived by Meem in the 1930s, has grown with the times and remains the focus of life at a vital and ever-developing university. In 1975, Meem donated his collection of drawings, plans, job files, photographs and person correspondence to form the nucleus of the John Gaw Meem Archives of Southwestern Architecture. Supported by an endowment from the Meem family, the archives collects primary source materials documenting New Mexico’s rich and unique architectural history, furthering the preservation and restoration activities initiated by Meem in the 1920s.