What Not To Read: Book Censorship in Early Modern Europe

Censorship is as old as civilization itself and remains as much a part of our world today as it was in times gone by. What has changed? What has remained the same? UNM’s Center for Southwest Research & Special Collections contains many examples of historical censorship that offer a starting point for that discussion.

Some of the earliest examples date to the time of the Protestant Reformation. In 1559, Pope Paul IV drew up a list of authors guilty of heresy, ranging from Luther, Calvin, Melancthon, and King Henry VIII, to more obscure figures. The Council of Trent took further action in 1562, forming a special commission to address the problem of heretical literature. Two years later, the commission published its own list of banned books, the famous Index librorum prohibitorum, a work that exerted a strong influence even outside the Catholic world until 1966, when it was officially abolished. 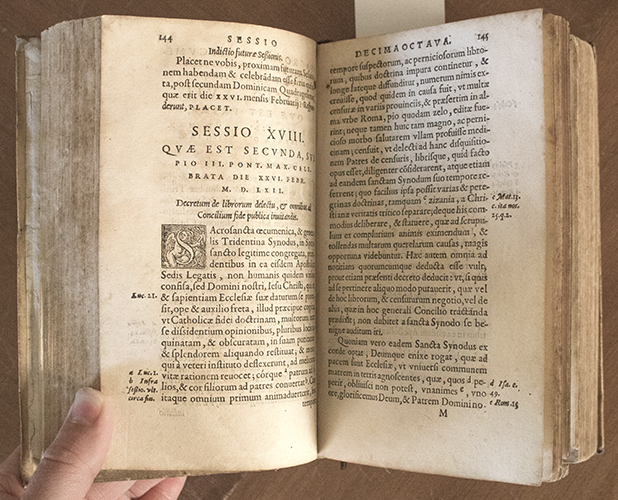 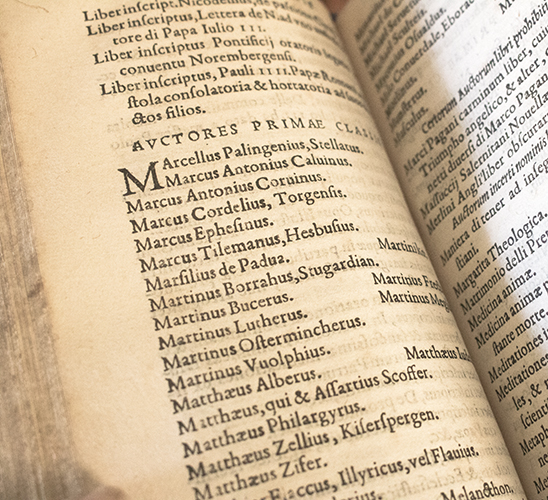 Special Collections owns a copy of a sixteenth-century edition of the decrees of the Council of Trent, in which the council announces its plans to crack down on writers who questioned or opposed Church doctrine. The volume, shown above, also contains a list of authors whose works had been banned, as well as the ten rules that the council established to guide censors in their work. 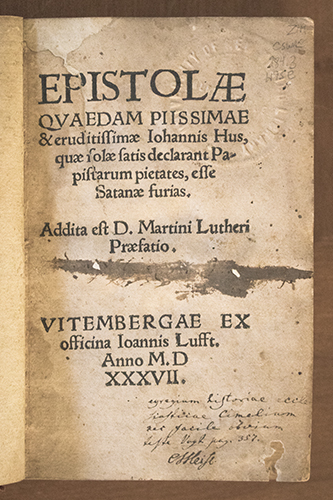 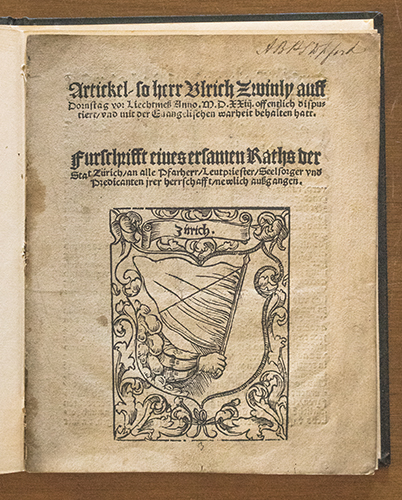 Two books from Special Collections that were banned by the Index librorum prohibitorum:
The Epistolae of Jan Hus, edited by Martin Luther and published in Wittenberg in 1537,
and the Artikel of Swiss reformer Ulrich Zwingli (1523).

By the eighteenth century, the Index forbade the reading of works by some of the greatest thinkers of the Renaissance and Enlightenment, including Copernicus, Galileo, Locke, Kant, Diderot, and Rousseau.  Even works by a few English novelists made it onto the list, foreshadowing a new category of literature that Church censors turned their attention to in the nineteenth century: “omnes fabulae amatoriae” (“all love stories”).

In addition to the papal index, local indexes existed. The most extensive was in Spain, where the Spanish Inquisition aggressively censored books, including vernacular texts and works of fiction like Cervantes’ Don Quixote. The first Spanish index was published in 1551. A copy of its final edition, published in 1790, is available in UNM’s Special Collections, along with an edition from 1707 (shown below). Like the early papal indexes, the 1707 edition provided three categories of banned books: authors whose works were banned in their entirety (such as Luther), authors whose works were only partly banned, and heretical works by anonymous authors. The lists were later combined and all works listed alphabetically for ease of reference. 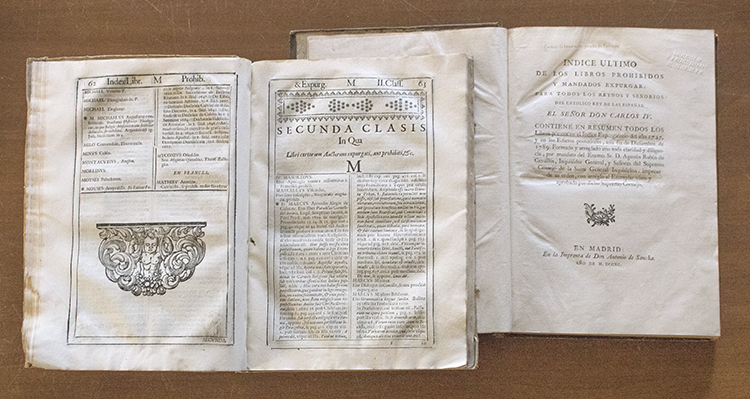 Censorship could take many forms. The most extreme was book burning. The frontispiece of an edition of the Roman Index published in 1783 depicts books being thrown into a fire. A caption from Acts 19:19 explains that the image refers to St. Paul’s conversion of the Greeks and Jews at Ephesus, where “Many of those who had practiced magic brought their books together and burned them in the sight of all.” The physical destruction of books, the image emphasizes, was rooted in scripture. 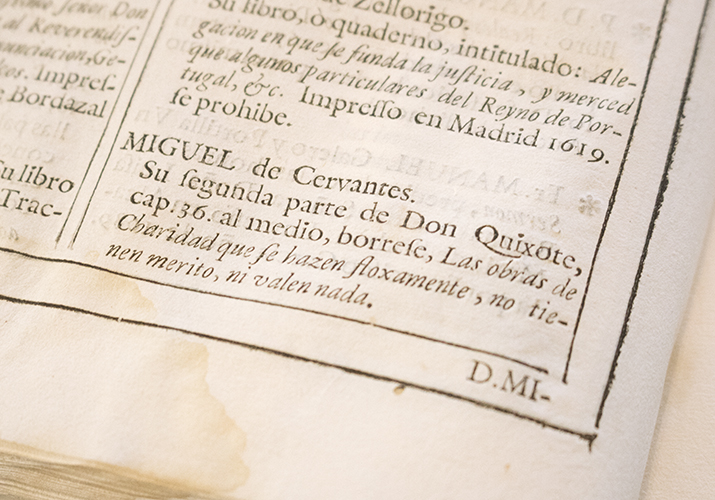 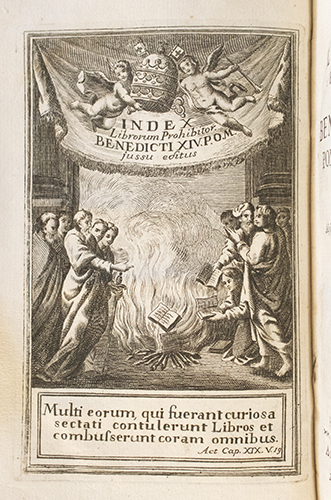 A milder form of censorship was expurgation or “correction.” This was employed if a book had already been published and was only partially objectionable. Censors might remove pages, paste strips of paper over the offending text, or cross out passages. One example of the latter technique can be found in UNM’s Special Collections. The library’s copy of Jacobus de Voragine’s Legenda aurea, published in Madrid in 1688, contains a short apocryphal tale found nowhere in the Gospels. The censor, identified only as “Pablo,” inked it out with a pen. He also inscribed the back of the title page: “Corregido por el Sto. Officio segun el nuevo expurgatorio del año de 1707” (“Corrected by the Holy Office according to the new expurgations of the year 1707”). (For another example of this kind of censorship, see our blog post from last year, “X Marks the Spot: Petrarch’s Censored Sonnets.”) 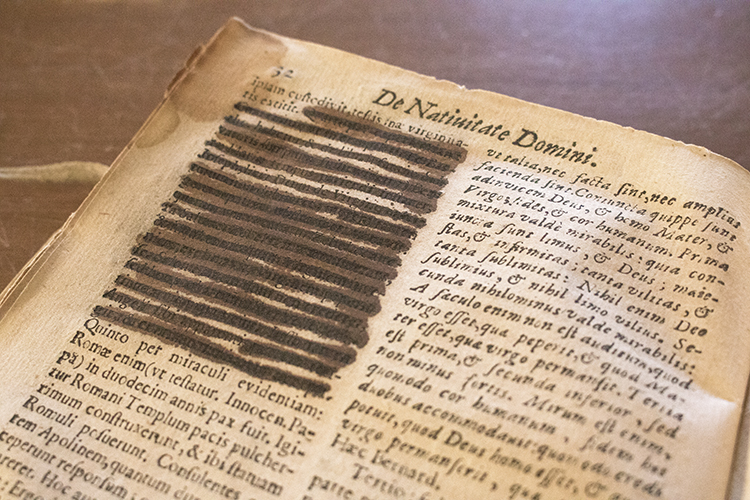 Civil governments, of course, whether Catholic or Protestant, understood the Church’s wish to keep dissent under control. They realized, however, that indexes of banned books were not very effective. As historian Julian Petley has observed, “Banning works once they have been published can be difficult, and often counter-productive, as such bans tend to give the works in question a curiosity value, or to draw them to the attention of a public which might otherwise have remained ignorant of their very existence.” A better alternative, many believed, was to license printers and publishers and encourage self-censorship through a system of guilds. Anyone who flouted the system’s rules was subject to severe punishment.

Government-sponsored licensing of the publishing industry lapsed in England in 1695, but up until the French Revolution, most French books bore the words avec approbation et privilège du roi (“with the king’s consent and pleasure”), or some variant phrase, on their title pages. This signified that royal censors had reviewed and authorized the text. Readers could be guaranteed that it contained nothing seditious, irreligious, or socially immoral, at least as judged by the standards of the ruling class. And because the king had indirectly approved the book, its quality was beyond doubt (similar today to cans of jelly and boxes of chocolates that have the words "By Appointment to Her Majesty the Queen" printed on them). Shown below is an example of a French book in the library’s Special Collections that was subjected to this form of censorship. 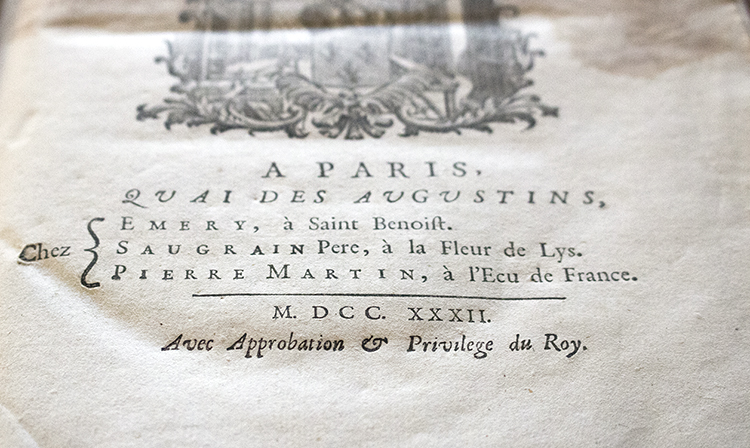