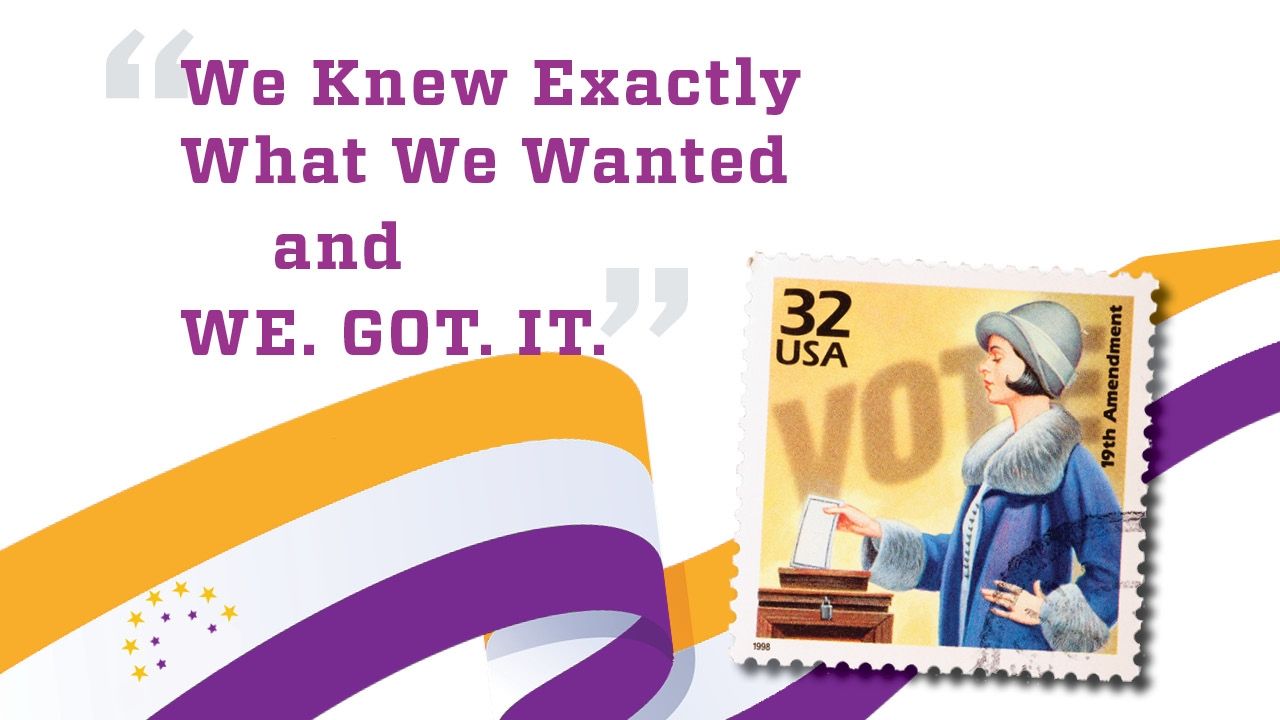 The Women's Vote: Selections from the Zimmerman Library Exhibit, UNM

My exhibit co curators are Marcy Botwick and Heather Maez, from Public Services in UNM Library, and Jennifer Eggleston, Conservationist, from CSWR.  Patricia Campbell, from UL Marketing, helped us with graphics and publicity.  In March, we put up a New Mexico suffrage display in the main lobby of Zimmerman Library.  Dr. Virginia Sharff was scheduled to talk about women winning the vote in the West.  Then Covid 19 intervened.  The display will remain up through the end of the year.  Hopefully conditions will get better and folks can come see it.  Stay tuned.

Meanwhile, here below are some parts of the display from the CSWR archives.  Visit my women's vote libguide for more.

In addition, please see Marcy's part of the show at another place online.  Hers is on a wonderful women's website developed by another of our co workers, Amy Winter, from Digital Initiatives and Scholarly Communications (DISC), in UNM Library.  It truly is a must see! 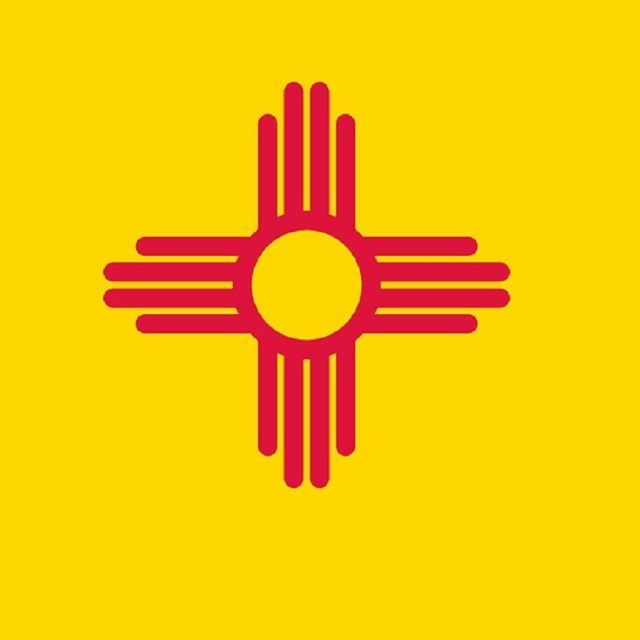 WOMEN’S RIGHT TO VOTE IN NM (from wall in library)

In 1787, the U.S. Constitution gave the right to vote to white men with land.  Women in colonial America started asking for the vote in 1634.  They formed local clubs and national organizations to write letters, march in parades, protest and pressure lawmakers to grant their rights.  In 1848, the first organized women’s rights conference met in Seneca Falls, NY.   By 1918, several of the states granted their women voting rights and in 1919, the U.S. President and Congress were discussing it.  In 1918, the U.S. Congress first proposed the Susan B. Anthony Amendment or the 19th Amendment to the Constitution granting women the right to vote and hold office.  It passed on June 4, 1919 and went to the states for ratification.  It passed with 36 of 48 states approving it, with three more joining by 1922.  New Mexico ratified it on February 21, 1920.  Maryland and six Southern states did not.  In November 1920, 25 million women were eligible to vote and run for office for the first time.  By comparison, in 2018, 53% of U.S. voters were women.  Imagine!

Displayed on this wall and in the adjoining cases are archival materials about suffrage from the collections of the Center for Southwest Research, UNM.  Over the decades, there were many women involved in the movement.  Here Susan B. Anthony and related artifacts represent the nation-wide effort.   Among the various New Mexican suffragists were Julia Brown Asplund and Nina Otero Warren.  Governor Larrazolo supported suffrage and ratified the 19th Amendment for New Mexico.  The Zimmerman librarians have provided the information “voting booths” beside this wall and a counter on the left with more histories of suffrage and voting rights. 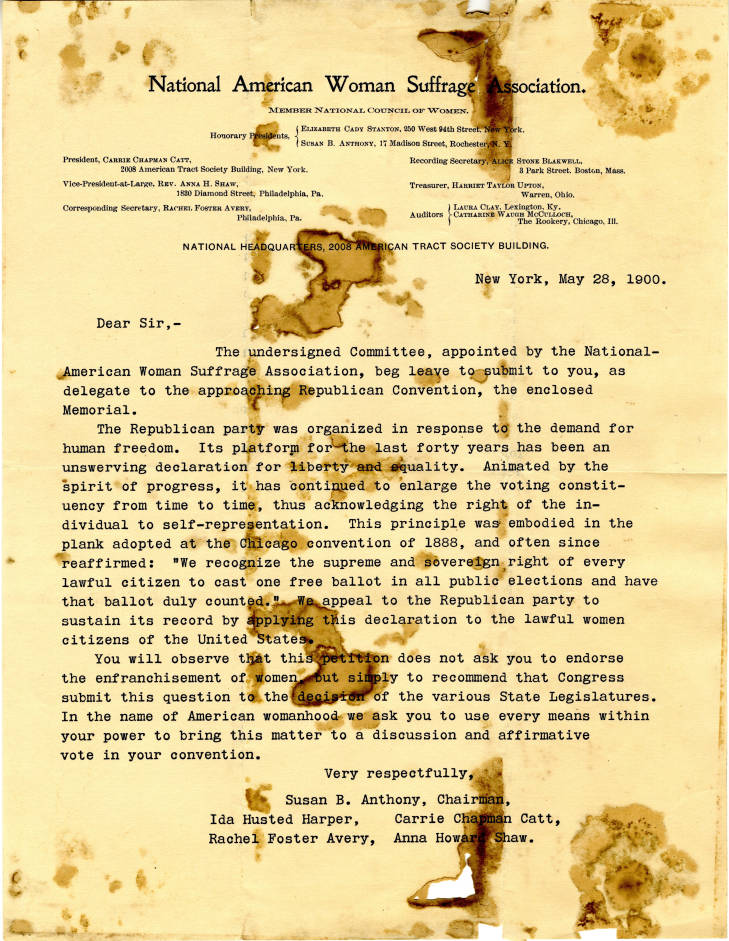 Letter, 1900, from the National American Woman Suffrage Association Committee, headed by Susan B. Anthony, Carrie Chapman Catt, and other women leaders, to Secundino Romero, of Las Vegas NM, the San Miguel County Delegate to the Republican National Convention - asking him to recommend the right of women to vote at the Republican Convention and in the US Congress, from the Secundino Romero Papers, MSS 287 BC, CSWR.

Susan B. Anthony (1820-1906), from Massachusetts, was a teacher, writer, speaker and suffragist leader. the 1840s, she was fighting for abolition and temperance and by 1866 for the right to vote and women’s property rights.  In 1905, she met with President Theodore Roosevelt to lobby for an amendment to the US Constitution for women to vote.  She helped lead the National American Woman Suffrage Association - saying no one would take women seriously until they had the right to vote. 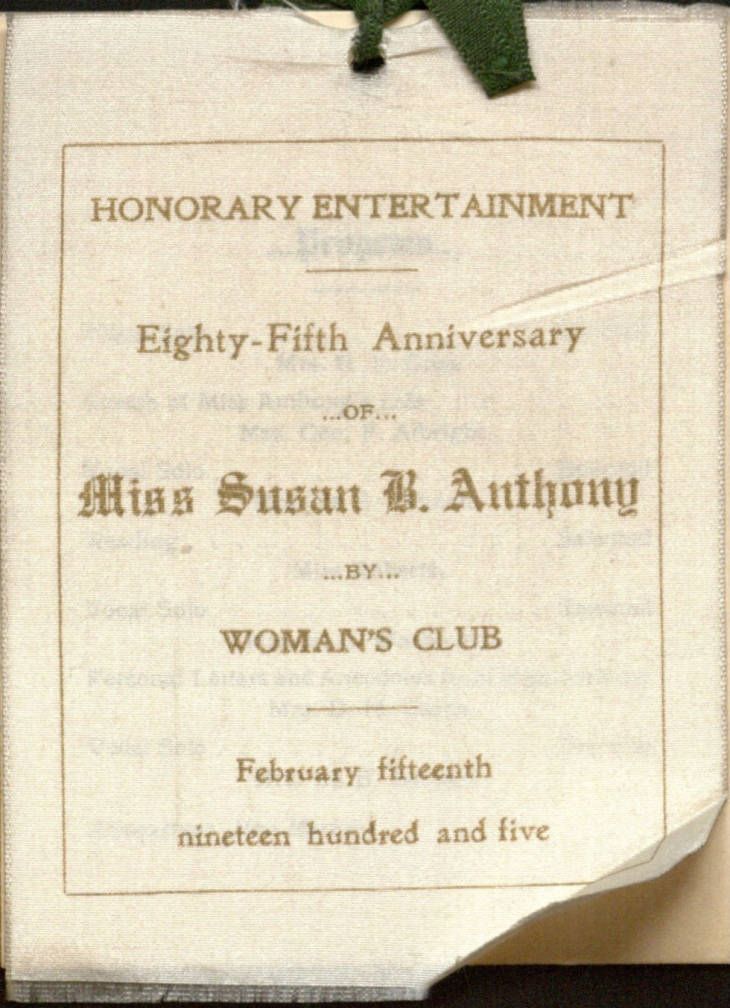 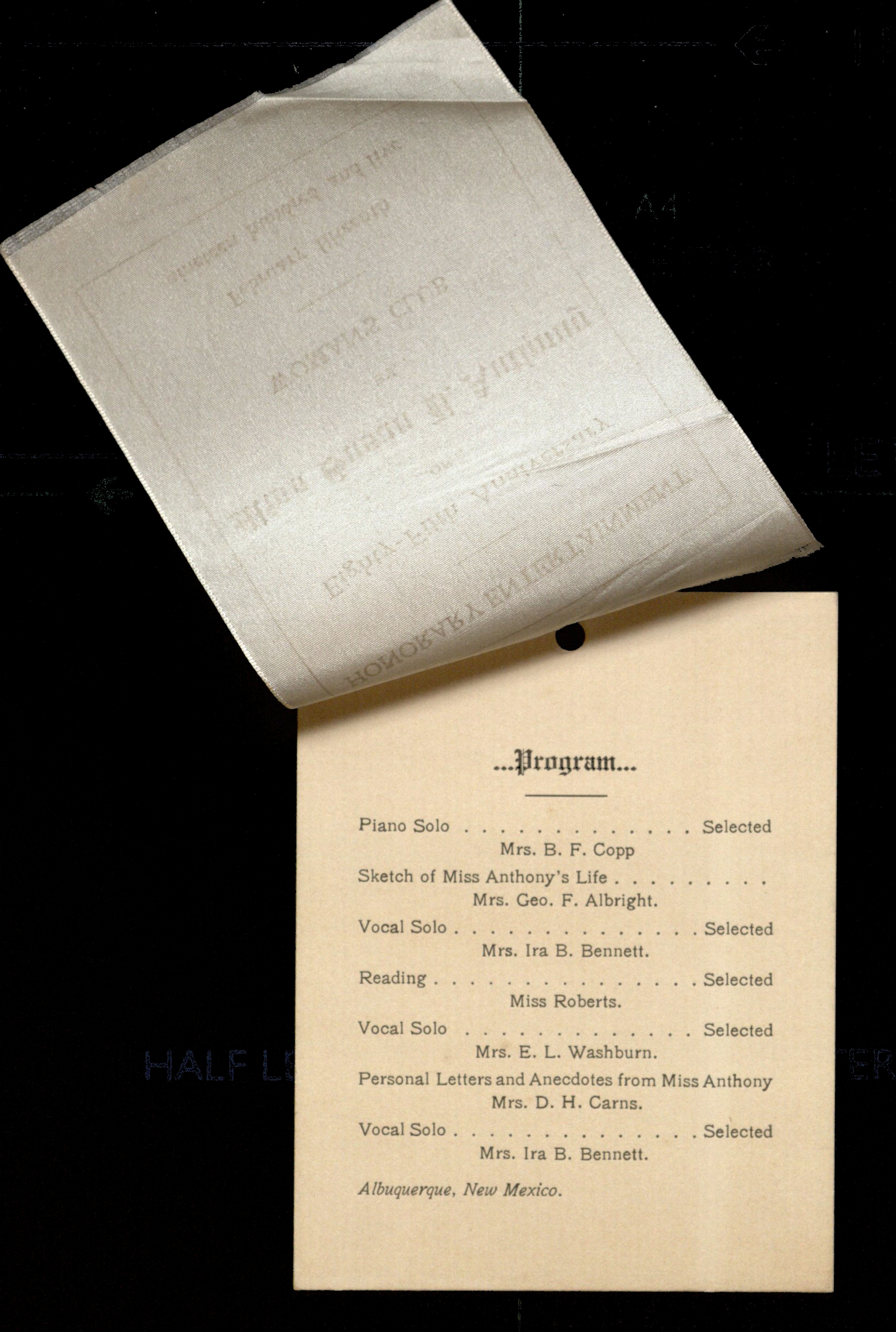 Program, 1905 Susan B. Anthony anniversary card, from the Albuquerque Women’s Club, tributes to her and musical performances, from the Margaret Kent Medler Scrapbook, MSS 225 BC, CSWR.  The women’s clubs spearheaded suffrage efforts across the country. 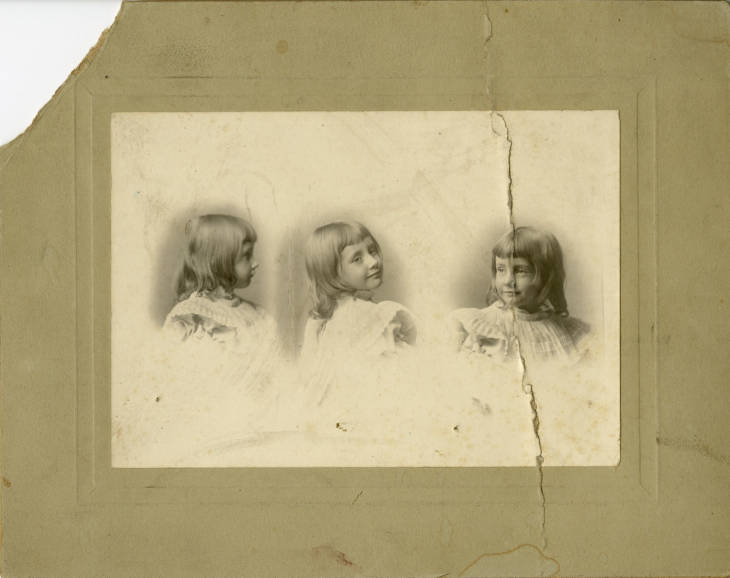 Adelina Otero Warren was a NM teacher, politician, business woman  and suffragist.  Well-educated and connected, she crossed between Hispanic and Anglo worlds, helping win acceptance of women as leaders.  By 1922, she was the first woman in NM -- and first Hispana in the nation -- to run for the U.S. House.  She was born in 1881 at La Constancia, near Los Lunas, and moved to Santa Fe in 1897.  By 1915, she was Chairman of the NM Legislative Committee of the Federation of Women’s Clubs.  In 1917, Governor Larrazolo appointed her Chairman of the NM Board of Health.  She was a leader at the December 1919 Albuquerque Suffrage Conference.

She was Superintendent of the Santa Fe County schools and the first woman inspector of the county’s Indian schools from 1923-1925.  She was also an Interpreter - Liaison Officer for the Pueblo Lands Board.  In 1918, Otero was on the Executive Board of the NM Red Cross as well as being Chairman of the Board of the NM Women’s Auxiliary of the Council of Defense, (northern Santa Fe area).  In 1923, she was Chairman of the NM Republican Women’s Organization

In 1935, President Roosevelt appointed Otero Director of the NM Civilian Conservation Corps (CCC) education program.  By 1937, she headed NM’s WPA adult education program.  She respected American contributions to NM and preserved the culture of Hispanics and Native Americans.  She improved the poor health, living, working and educational conditions of Hispanics, Native Americans and Anglos across the state. 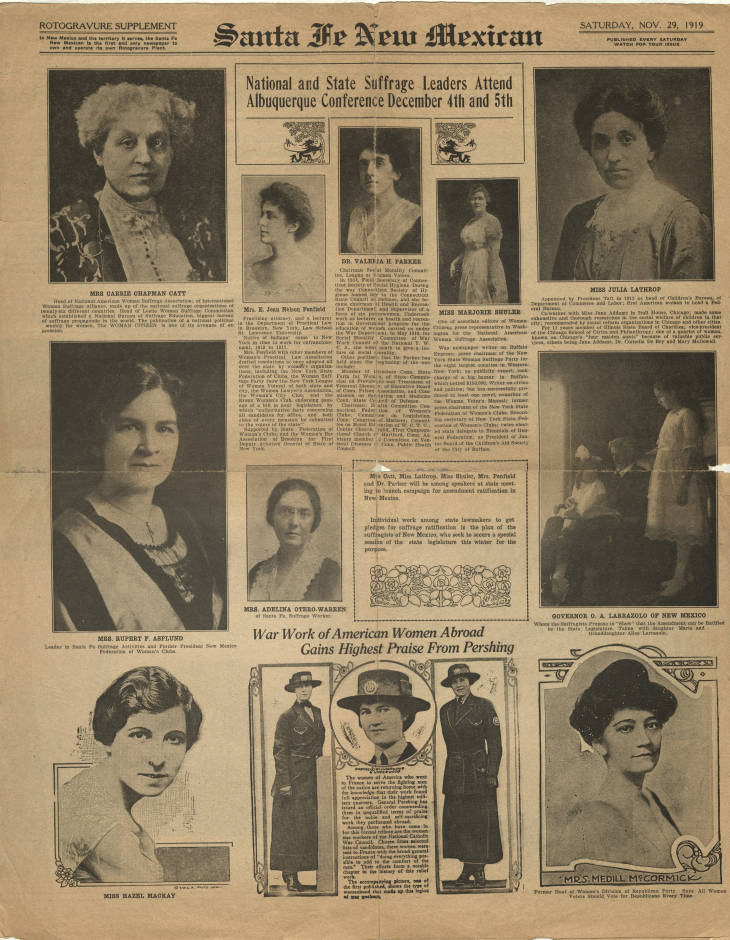 Newspaper, showing US national and NM suffrage leaders meeting at a conference in Albuquerque in December 1919.  Among those featured on this page fighting for suffrage were Carrie Chapman Catt, Julia Brown Asplund, Adelina Otero Warren and Governor Larrazolo.  A supplement from the Santa Fe New Mexican, November 29, 1919, from the Octaviano Larrazolo Papers, MSS 614 BC, CSWR. 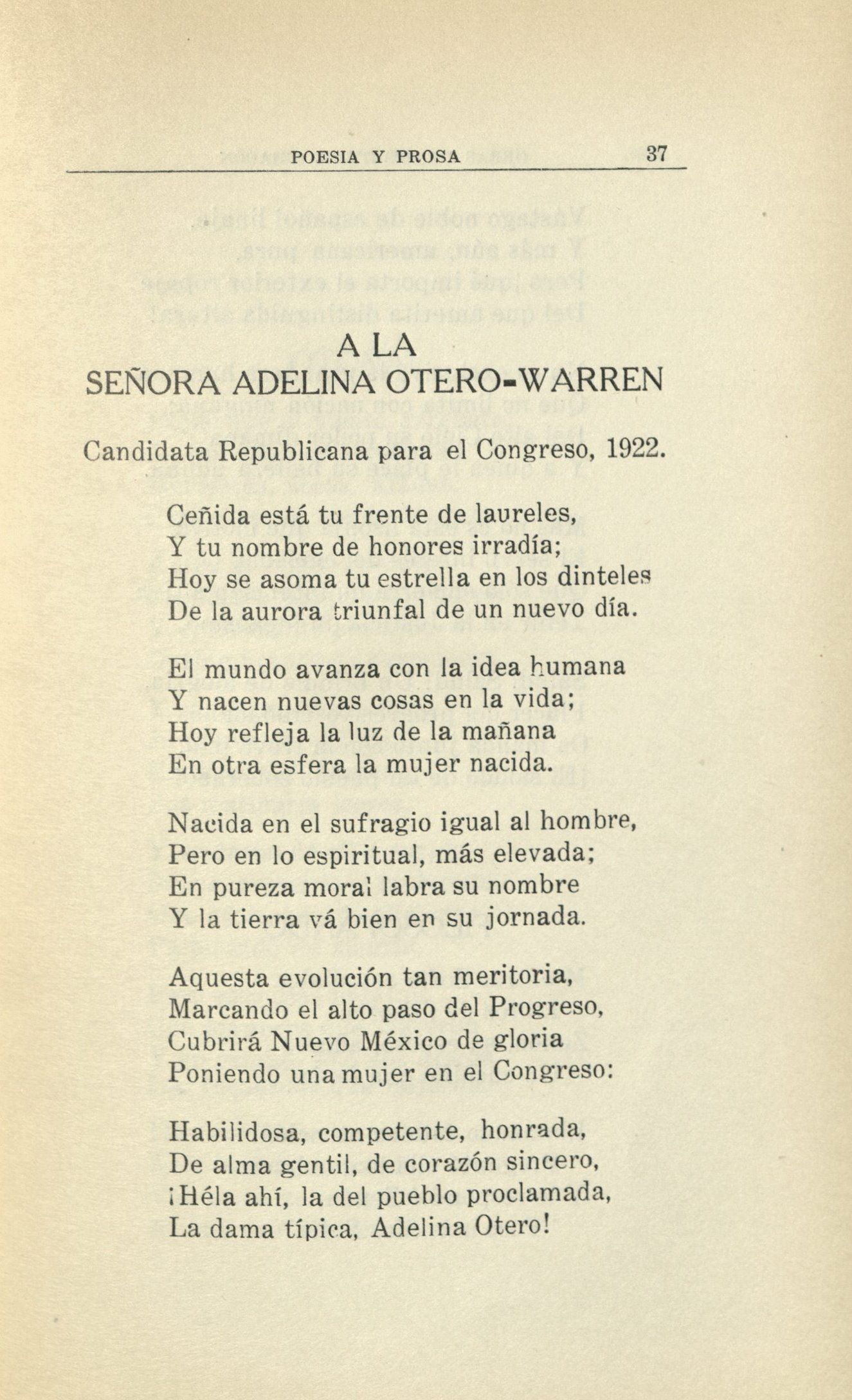 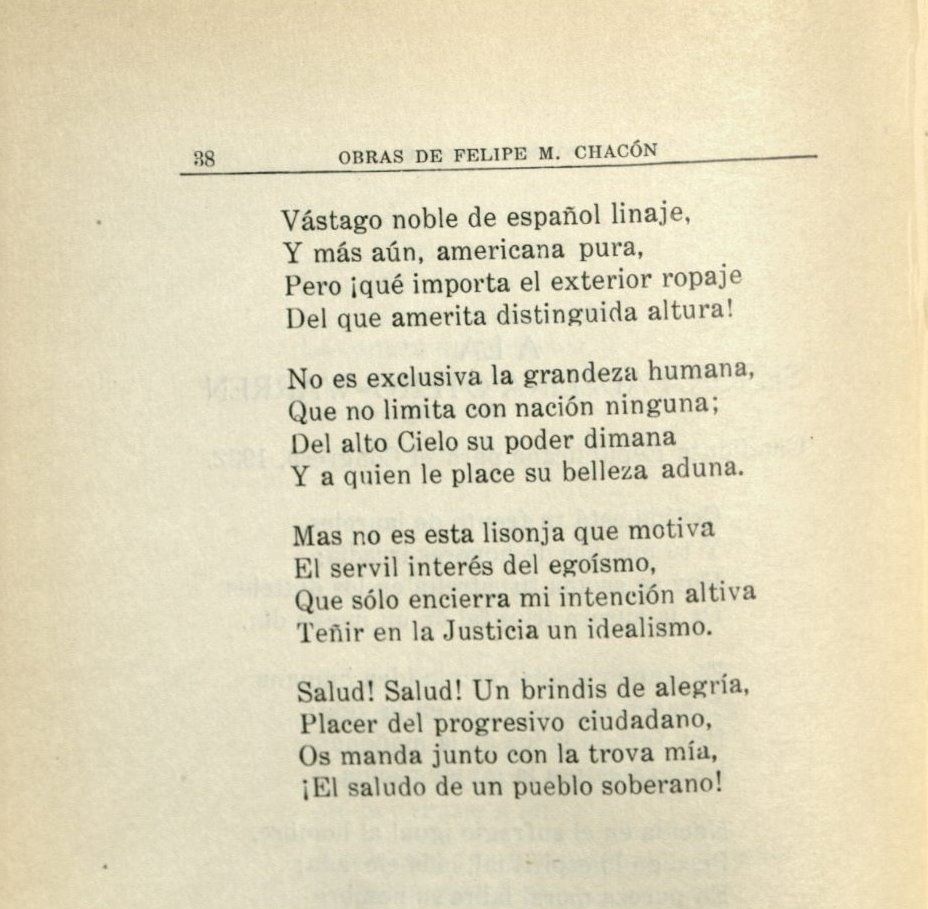 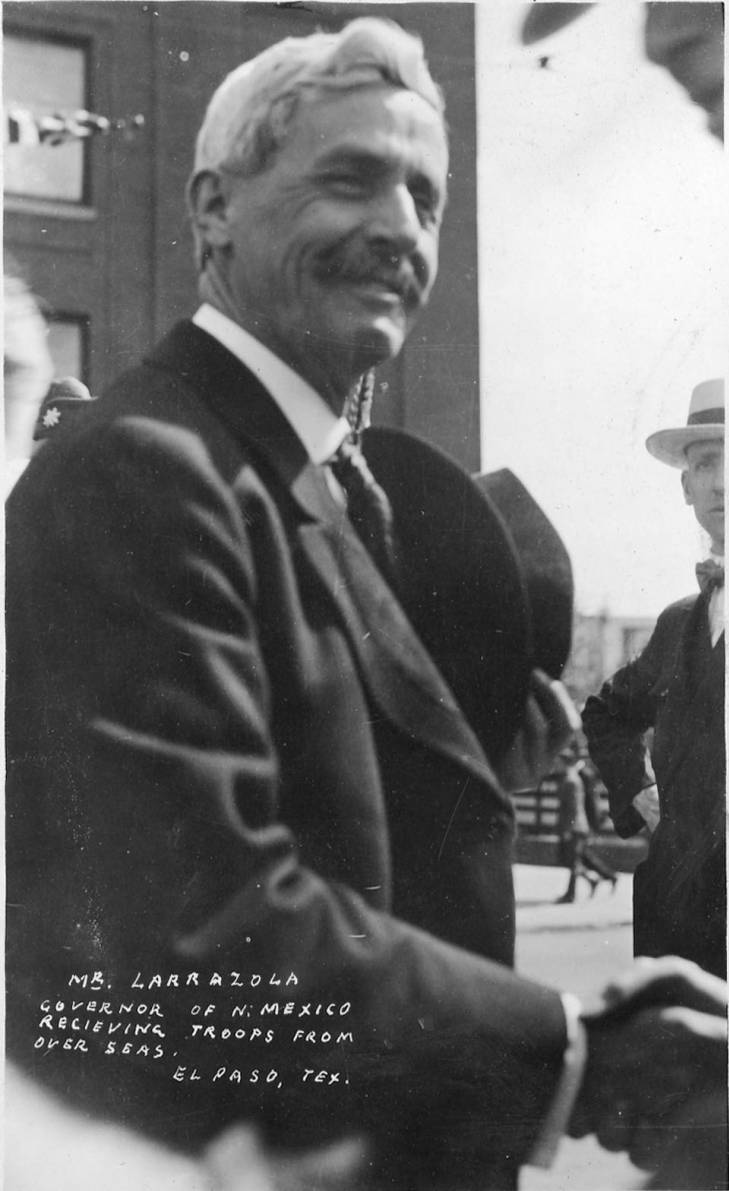 Governor Octaviano Larrazolo supported the right of NM women to vote, pushed the Republicans to accept it, and ratified the 19th US Constitutional Amendment for NM in 1920.  He was a civil rights advocate and a gifted orator.  He knew many of the leading NM suffragists and of their contributions to the State.  In his Address to the Legislature of the State of NM, Santa Fe, January 15, 1919, Larrazolo asked his fellow NM Republicans to keep their pledge to support women's right to vote -- even recommending an amendment to the NM State Constitution to guarantee their rights.  In addition, ­­­he called for a NM law granting equal pay to women!

Born in 1859, in Chihuahua, Mexico, Larrazolo became a US citizen in 1884.  Arizona Archbishop J. B. Salpointe sponsored his education at St. Michael’s College in Santa Fe.  In the 1870s-1880s, Larrazolo taught school, became a lawyer, and was District Attorney in El Paso.  Later he move to Las Vegas, NM, opened a law office, wrote for the local newspapers and ran twice for NM Territorial Delegate to the US Congress.  He supported NM Statehood and the equal rights of Hispanics in the 1910 NM Constitution.

In 1918, Larrazolo was elected the first Republican governor of NM -- the only native Mexican ever chosen.  Besides suffrage, he promoted education, good relations with Latin America, public health programs, jobs for veterans and the rights of labor and management.  He asked the Federal government to cede public lands back to NM, supported the Rio Grande water conservancy district, and addressed the problems of mining, farming, highway construction and better roads.

Larrazolo was not nominated to a second term as governor.  By 1922, he practiced law in Albuquerque, was a Progressive leader and fought political bossism in NM.  He was elected to the NM House in 1926 and in 1928, to the US Senate.  He was the first Hispanic American to serve in the US Senate.  He died in 1930. 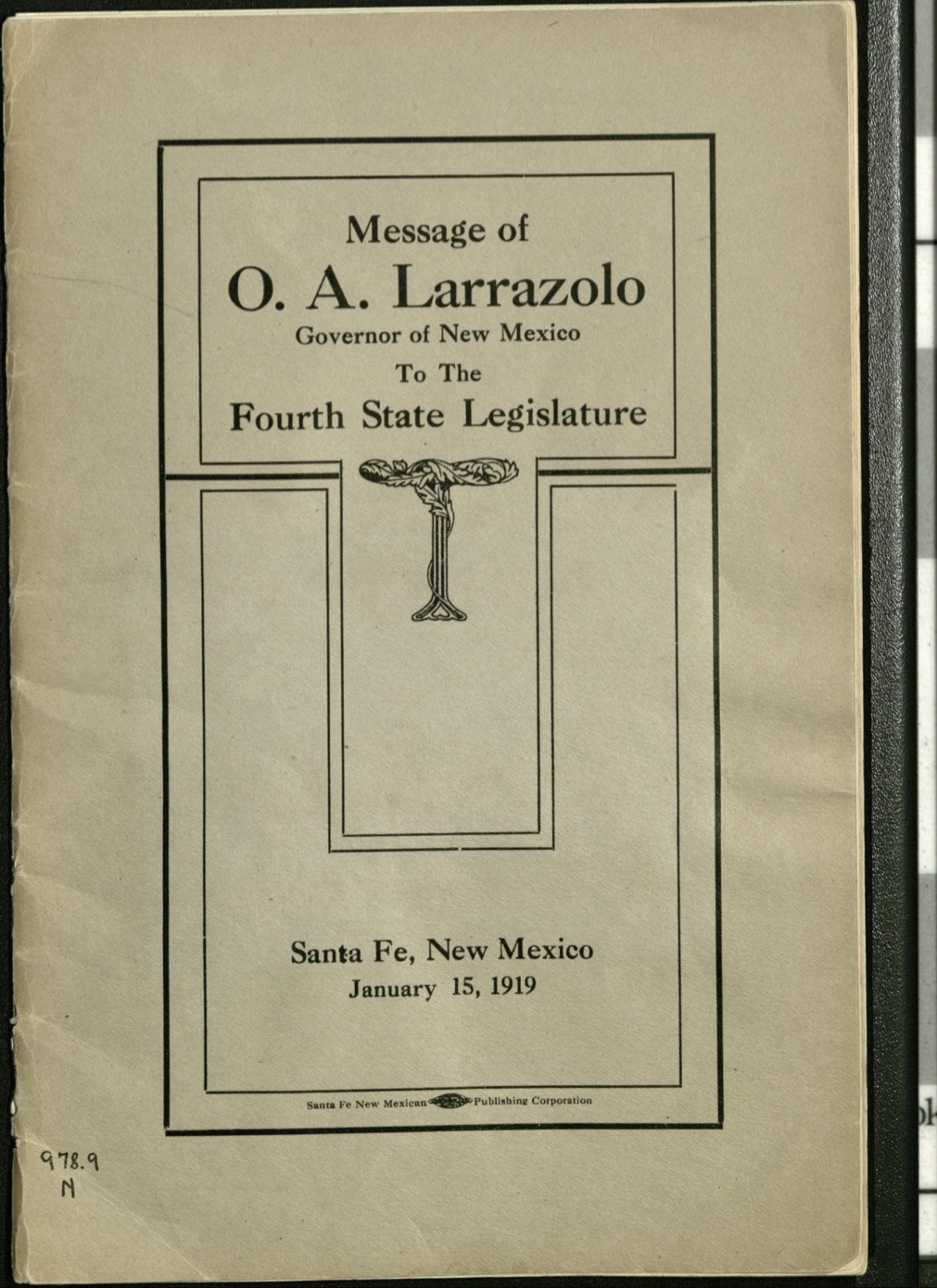 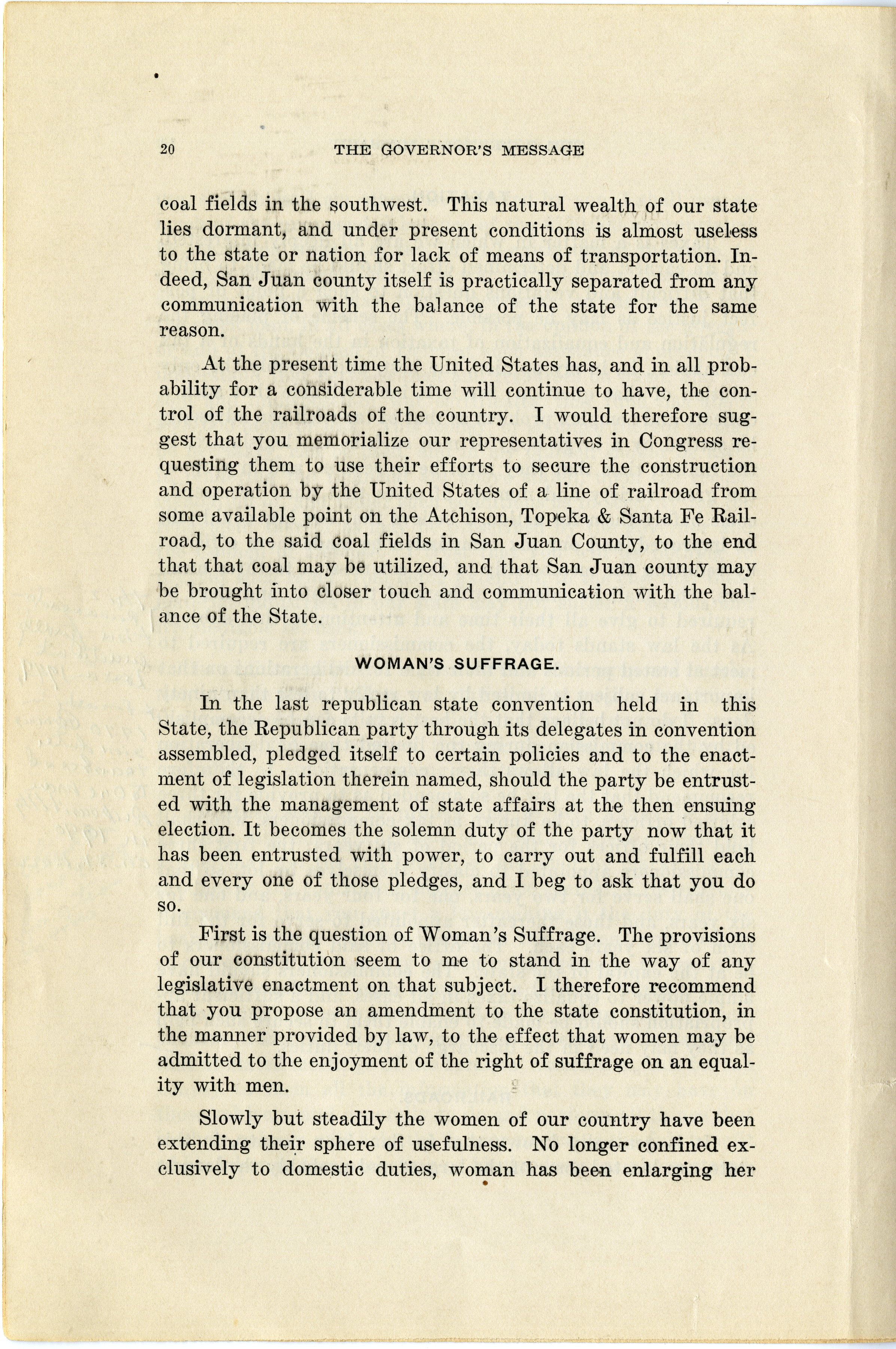 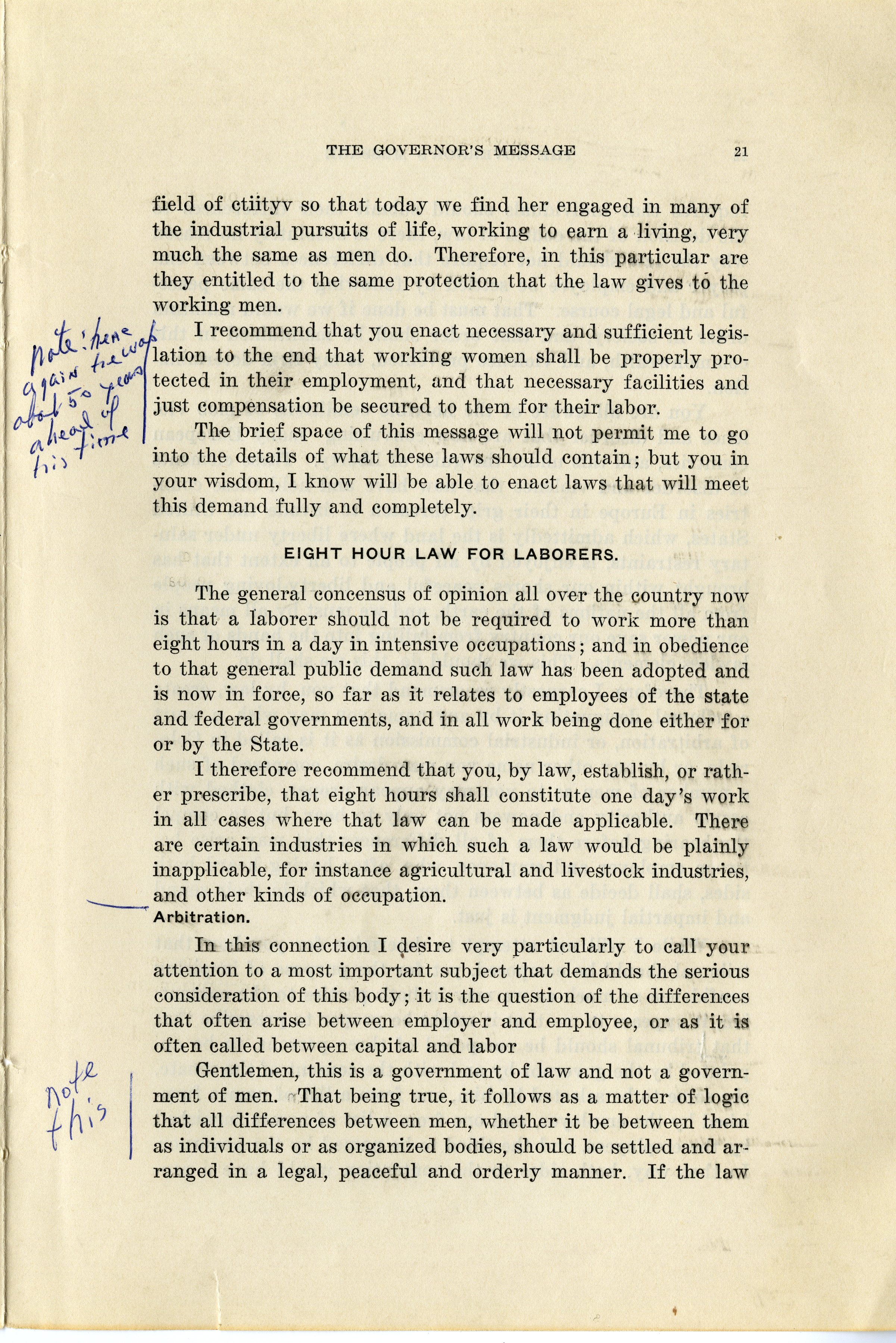 Cover, Message of Governor O. A. Larrazolo to the 4th Legislature of the State of NM, Santa Fe, January 15, 1919.  Note on page 20 above  Larrazolo asked NM Republicans to keep their pledge to support women's right to vote.  He also recommended an amendment added to the NM Constitution to guarantee their rights.  On page­­­­­­­­ 21, he called for a NM law granting equal pay to women, Larrazolo Papers, CSWR.

Newspaper clipping, “Suffrage Fight to Come Up”, showing opposition to women voting by some men in the NM Legislature and Larrazolo’s effort to persuade them to support suffrage, from Santa Fe New Mexican, February 16, 1920, Larrazolo Papers, CSWR. 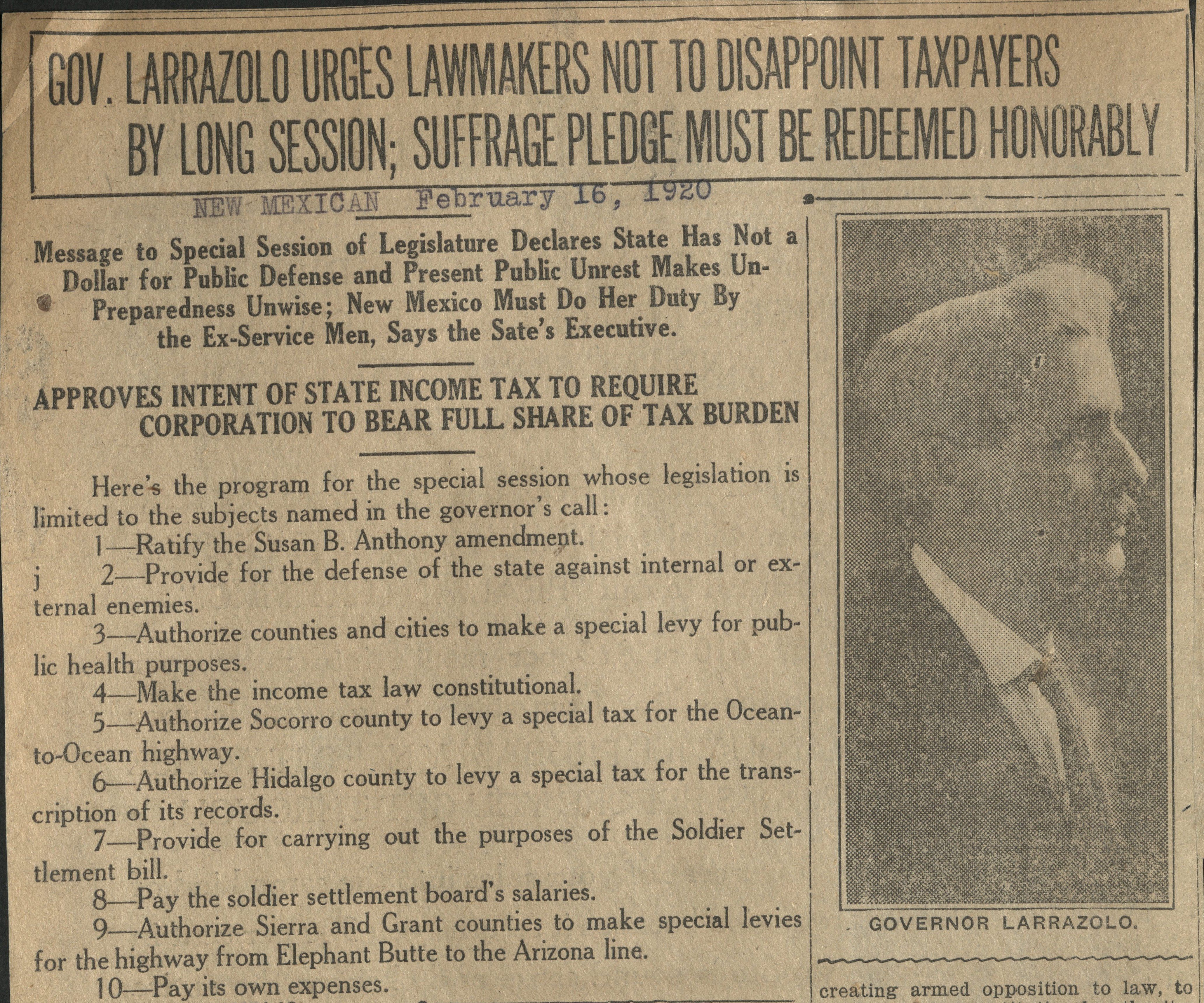 Hurray!  Don't forget to complete the 2020 census form and vote in November. 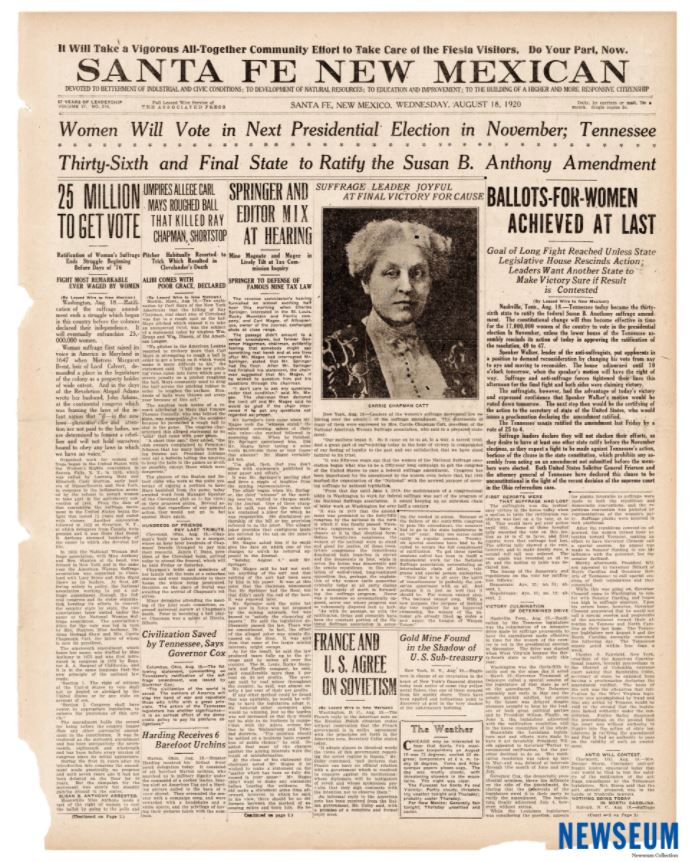 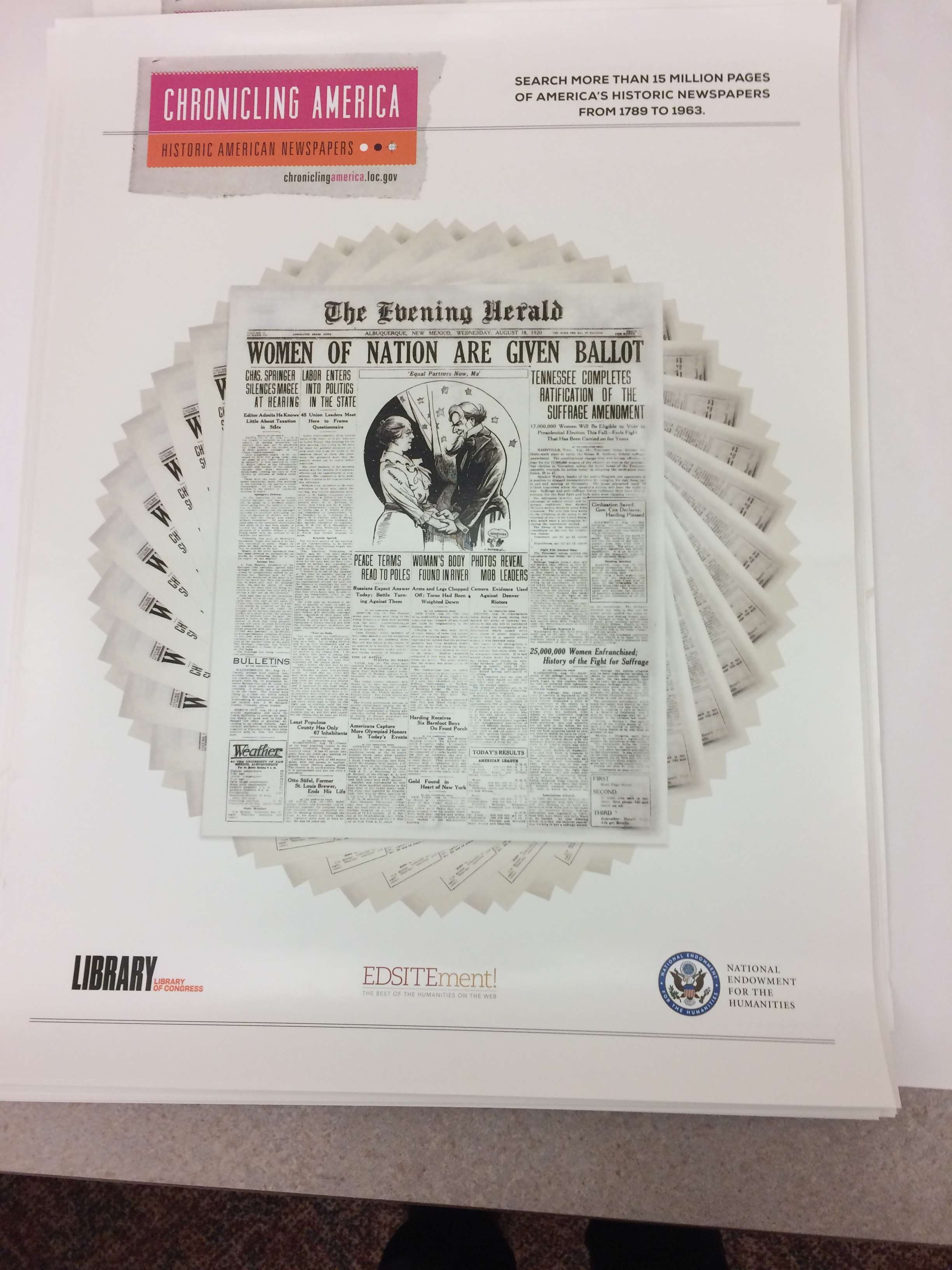