Online Exhibit 'And Yet She Persisted' Showcases University Libraries Collections

"And Yet She Persisted:  Documenting Women's History in New Mexico" is a new online exhibit exploring women's history in the Land of Enchantment.  The exhibit was created in celebration of Women's History Month 2018 and to honor the arrival of Dr Garnett Stokes, UNM's first female president.  The exhibit was conceived and curated by Mary Wise, assistant professor and digital humanities librarian, and Amy Winter, program specialist, of the Digital Initiatives and Scholarly Communication Program (DISC) in the College of Libraries and Learning Sciences at the University of New Mexico.

This enduring digital humanities project will be expanded in the coming months. The first phase of the project explores structures governing women, attitudes about women, and women's academic achievements at UNM. “While campus borders limit the initial scope of the project, we hope that the project will grow in our second phase beyond the boundaries of campus,” say the creators.  In addition to historic images, the exhibit includes data and visualizations, interpretive essays, and primary sources, all of which highlight University Libraries' unique collections and the services DISC can provide to student and faculty researchers.

To celebrate the launch of this project, the curators share their favorite discoveries from the archives and from the data compiled for the project.

One question drove our visualizations:  How many women graduated from the University of New Mexico from 1916 to 2016?  While we are still working on compiling that data, we currently have organized graduation data from 1916 to 1950.  We were surprised to see that the University of New Mexico trained a high number of women from 1916 to 1925:  in fact, graduation rates by sex revealed that approximately the same number of women earned degrees from UNM as men during that time period.  In 1916, women could not vote in state or federal elections, serve on juries in most states, acquire credit in their name or apply for a bank loan.  Despite these restrictions, New Mexican women not only sought but successfully graduated with degrees from the University of New Mexico.  In fact, graduation rates remained relatively equal between men and women at UNM until 1947, when graduation rates for men rose sharply.  The data raise more questions than answers, and the DISC faculty and staff plan to continue to contextualize the data and explore women's contributions at UNM and beyond. 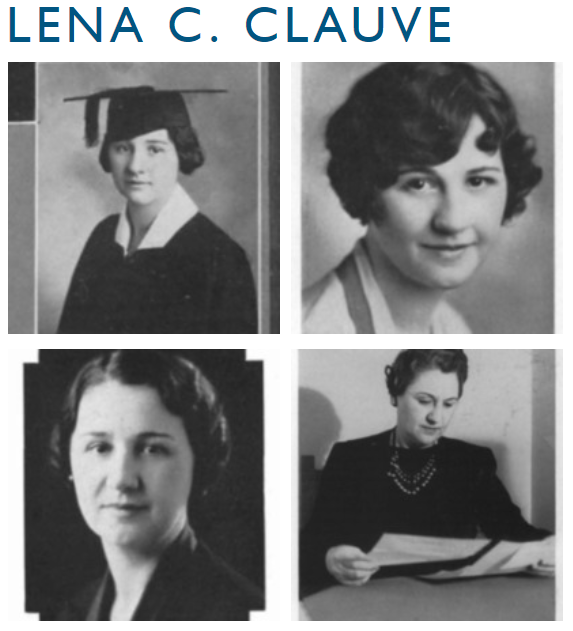 During the time the exhibit was being created, many brave survivors of sexual assault used the #MeToo to share their experiences.  The curators were surprised to read that Lena Clauve, the first Dean of Women at UNM, experienced sexual harassment and retaliation from a colleague when she was a young woman.

Lena had been promised a job as a music teacher upon her graduation from UNM.  However, when she met with John Milne, the APS Superintendent at the time, John refused to hire Lena because, he said, she was an "immoral" woman.   Lena later learned one of her references, a music professor, had made this accusation.  Why would he describe her this way?  Because she rejected his repeated requests for a date.  For more on this story, check out the biography page for Dean Clauve developed as part of this project.

Lena Clauve was a transformative figure at UNM who mentored hundreds of women during her three-decade tenure as the Dean of Women.  But her experiences being harassed as a young woman -- and the fact that many contemporary women can relate to those experiences -- provides a concrete example of the kinds of systematic harassment that American women have faced for hundreds of years.  "And Yet She Persisted" aims to document the social structures that have long hampered New Mexican women, and celebrate their narratives of resistance.

The primary source materials for this exhibit are available for educational use in UNM's Digital Repository and via New Mexico Digital Collections.  For more information, contact Digital Initiatives and Scholarly Communication at University Libraries.