The New Mexico newspapers dating before 1922 are also available for reading online and with easier access on UNM Digital Repository.

A Related Libguide For Newspapers

Also see another useful related libguide about newspapers for this area and beyond.

The local newspapers contain valuable information on New Mexico women. Some of them are online. From the Library Homepage go to the section for databases.

Under Alpha Letter N - find Access Newspaper Archive Online, has scanned newspapers for Santa Fe, Albuquerque and Las Vegas for more than a 100 years, and for other towns in more recent decades.

Under Alpha Letter N - find New Mexico Newsstand - it offers newspapers for Albuquerque since 1995 and Las Cruces and Roswell since 2004.

Under Alpha Letter C - find Chronicling America, which is a Library of Congress website, has scans of many New Mexico newspapers up to December 1922, as provided to the LOC by the CSWR / UNM.

Sometimes there are original newspapers or news clippings within the CSWR manuscript collections. Here are two items from the Octaviano Larrazolo Papers, 1841-1981 (MSS 614 BC).

On the left - a newspaper that shows the National and New Mexico suffrage leaders who will be at a conference in Albuquerque in December 1919. Supplement page is from the Santa Fe New Mexican newspaper, Saturday, November 29, 1919. From Larrazolo, Oversize Folder.

On the right - a news clipping showing the fight in the New Mexico House of Representatives over the "Susan B. Anthony Amendment" for the right of women to vote, with some males opposing and others supporting it. Clipping is from the Santa Fe New Mexican newspaper, February 16, 1920. From Larrazolo, Box 2, Scrapbook.

Article on the left, also on newspaperarchive.com - Link

Article on the right, also on newspaperarchive.com - Link

(Note, when the link opens to the newspaper page, click on the <Previous Page and >Next Page arrows a couple of times to focus the image. Or zoom in to see these clippings.) 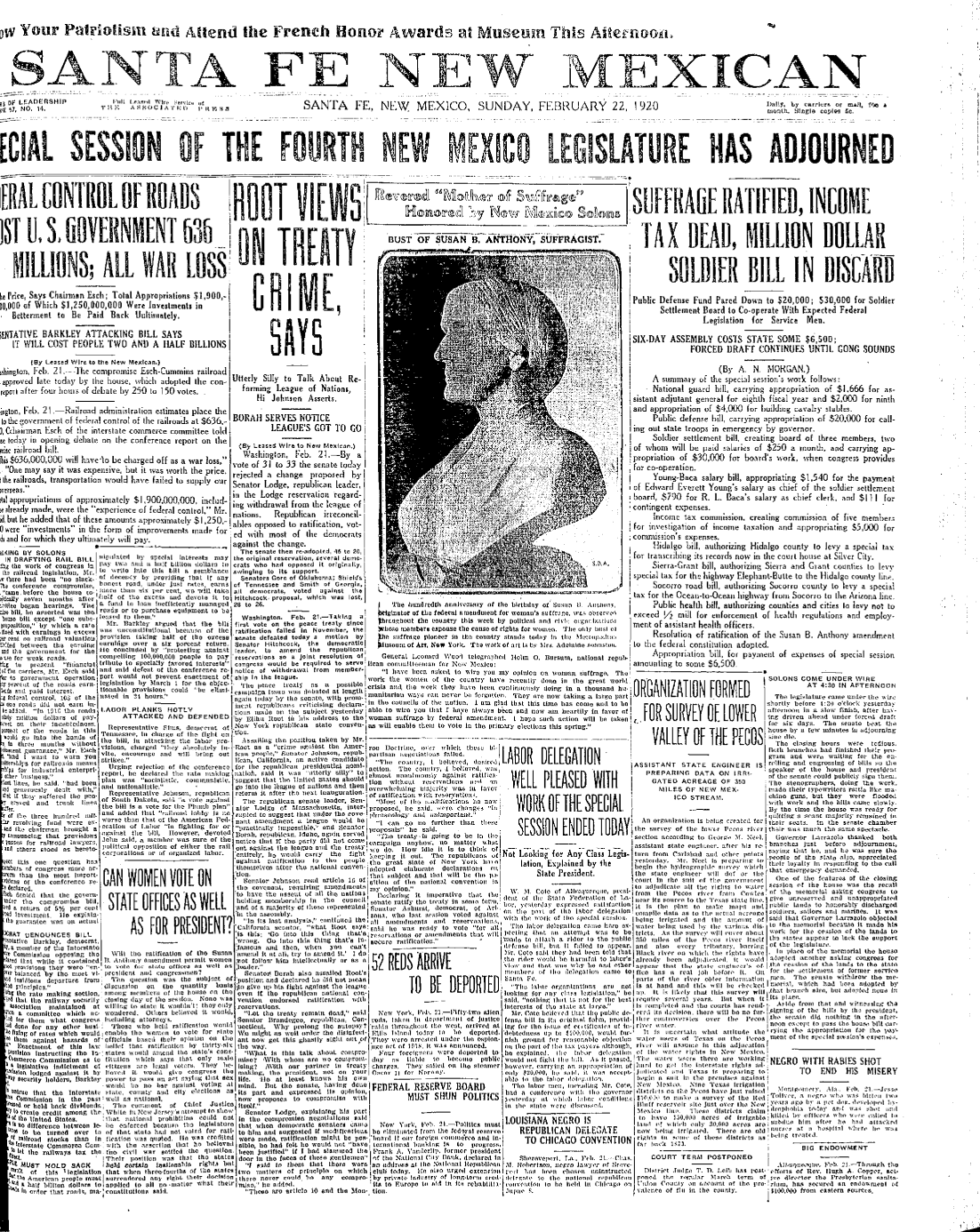 The Santa Fe New Mexican newspaper for February 22, 1920, with headline about the New Mexico Legislature approving the 19th Amendment to the Constitution of the United States for the Right of Women to Vote. Note the tribute to Susan B. Anthony, the Mother of Suffrage, and already the confusion and question raised on lower left if women can vote for State offices as well as President? Image from newspaperarchive.com  -  Link.  (See Note on left on how to focus the page).