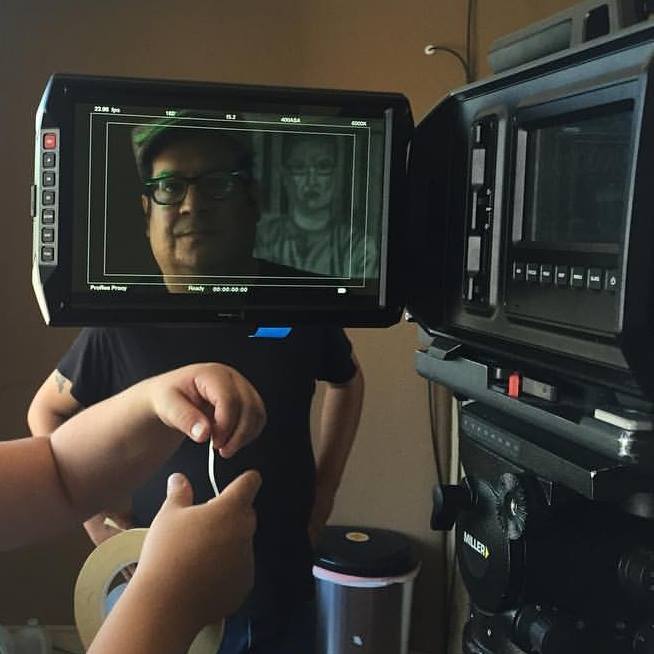 A student with long hair, black pants, and a hat, skateboards down the paved road of the parking garage.  The student can be seen quite clearly as the top of the parking garage aligns with the window in Jason Asenap’s office. Like all of the offices in Fine Arts & Design Library, the walls are made of glass and offer amazing views of the Sandia Mountains, as well as, down Central Avenue to the volcanoes.  The skateboarder looks like a fine arts student, the kind that might frequent the Fine Arts Library where Jason works as a Library Information Specialist 3.

Jason grew up in Walters, Oklahoma, a city with a population of just 2,551 in 2010 and a motto matching the city’s size, “Small town, big heart.”  He graduated from the University of Oklahoma with a Bachelor’s degree in Literature and went on to obtain his Master’s in Screenwriting from the Institute of American Indian Arts in Santa Fe. He had just finished a summer film program in Santa Fe, when he began working part-time for the Albuquerque Public Libraries, hoping to work temporarily until his film career or his second Master’s in Art History came to fruition. Instead, in April 2006, a large fire broke out at UNM’s Zimmerman Library. As tragedy struck Zimmerman, a new door opened for Jason. Jason applied for a position in Zimmerman to help organize books and other materials that needed to be relocated due to the fire.

Eleven years later, Jason still works for the University Libraries but he is now a Library Information Specialist 3 and has an office in FADL. He works with instructors and faculty all over campus who are looking for resources on dance, film, art history, art studio, and photography and often finds himself intrigued by their selections. Jason describes his co-workers as “awesome” and loves working with faculty to assist with their selections. He even finds inspiration in the FADL building itself because of the building’s unique design which allows for a lot of natural light and open space.

Jason seems genuinely happy with his work life. He mentions wanting to teach one day but appreciates that his current position allows him time after work to be creative. In fact, “being creative” does not accurately describe Jason’s personal life. Jason is a very productive artist. Between traveling to Oklahoma for Pow Wows, he writes for two magazines, High Country News and Indian Country Today. He also writes, funds, films, produces, acts, and collaborates in filmmaking. At the moment, he is waiting for the color correction and soundtrack for his film to wrap up so he can finish his latest film and submit it to several film festivals for review. He is also co-writing with a friend in Santa Fe on a second film and is planning to act in a third. He will tour both of these films as well. It seems winning the Sundance fellowship in 2011 (only 4 filmmakers were chosen), was just the beginning of his creative endeavors.

Jason is a Renaissance man, in the truest sense. He is a film producer, freelance writer, aspiring honkytonk musician, and a valuable resource for faculty and staff.