Digitized Documents and Ebooks With Some Documents

The NEW MEXICO DIGITAL COLLECTION (NMDC) - a CSWR / UNM website, contains scans of selected documents, reports, maps and photos from the CSWR archive collections.  It also has some digitized key printed NM historical studies, plus maps from MAGIC, UNM's Map and Geographical Information Center, located in the basement of the Centennial Science and Engineering Library (CSEL). Some CSWR documents on microfilm have also been loaded there.

(Further, the NMDC has selected archival materials scanned from twelve other NM repositories!)

Here are some examples of documents from CSWR MSS collections that are on the NMDC:

Other archival sources from CSWR on the NMDC:

-William G. Ritch Papers, 1539-1901, a CSWR digital New Mexico repatriation project - material digitized from 6 of the 11 reels of microfilm from Huntington Library and is on the NMDC. These are scans of New Mexico documents gathered in the 1880s by Secretary of the Territory Ritch from the Palace of the Governors Library, Santa Fe, with some notes and transcriptions by him and others. They are from the Spanish, Mexican and Territorial eras.  Broad range, among them are papers for pre- and post 1680 revolt Spanish and Indian relations, Spanish governors’ orders, court records, population data, and church inventories,  There are Mexican era appointments to the presidio and local posts, court papers, 1815 small pox vaccination records, and accounts of the 1837 revolt.  Also included are Mexican licenses to trade with Indians, passports, Santa Fe Trail taxes, prices, views of the American occupation, and local political struggles. Others are Civil War accounts, Indian deprivations reports, U.S. Army Indian campaigns, suffering of Native Americans and peace efforts.  Accounts for public buildings, capitol, elections, legislature reports, disputes over public and Catholic education, mining, Colfax County and Lincoln County wars and much more.

-Spanish Colonial  Research Center (SCRC) documents at CSWR - thousands of them scanned from reels of microfilm for the NMDC.  Documents were collected from archives in Spain and Mexico and described - for interpretive work at National Park Service Spanish colonial historical sites, ca 1530-1820.  Range - Borderlands - California to Florida, to Washington, D.C., Alaska, Cuba, the Virgin Islands, Puerto Rico and the Philippines, with some crossover to New England, New France, and early United States. Some for NM history.  Mainly Spanish military, correspondence, service records, towns, missions, Indian affairs, including African American soldiers, Negros - Mulatos, some for Acadians, in the American Revolution, American filibusters, Pike, etc.  An overview and detailed finding guide for this collection can be viewed on the UNM Digital Repository.  (For more SCRC material, including maps from the NPS held at UNM - See the Tab on the left side bar - Historical Documents Collected by the National Park Service).

(Tip:  Ebooks - Some books - based on historical documents - are available online. From UNM Library home page - search and use limiter - Ebook - on left side bar - to select them.  Here are some that came from a search for - New Mexico history.

Proceedings in the Case of the United States versus William Christy - for military expedition in New Orleans against Mexico, 1835, trial of a filibuster, New Orleans, 1836. Trail and documents.

Also, the book Kiva, Cross, and Crown - a history of Pecos Pueblo, with good background on early New Mexico, by John L. Kessell, is available online via the National Park Service website). 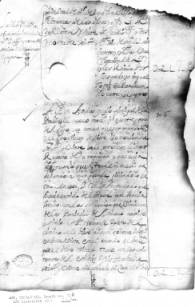 The Spanish Colonial Research Center, UNM, published a quarterly journal called the Colonial Latin American Historical Review from 1992 - 2008.  It carried articles in English and in Spanish spanning the centuries of history of the New World Spanish Empire.  Includes Mexico and some New Mexico material.  Check the CLAHR indexes - you may find your topic there.